New evidence showing that the Nigerian military was informed that Boko Haram was planning mass abductions in Yobe State has emerged. A document obtained by SaharaReporters indicated that the Defence Headquarters (DHQ) was notified by the Defence Intelligence Agency (DIA) of plans by Boko Haram militants to carry out a massive attack in February.

The confidential memo dated February 6, 2018, and titled “Plans By BHT To Carry Out Massive Attacks In Maiduguri And Damaturu” was signed by Brigadier-General EA Adeniyi, he stated that intelligence gathered by the agency indicated that the most likely targets of large-scale Boko Haram attack will be the University of Maiduguri, mosques, markets, and parks in Borno.   To carry out the attacks, the document further revealed that Boko Haram had hired about 17 suicide bombers, who were ready to strike as well as carry out abductions. 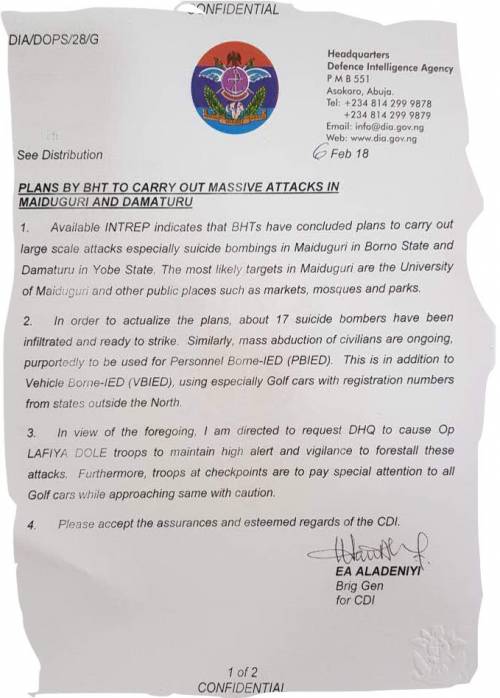 Specifically, the document stated and warned of mass abductions:”Similarly, mass abductions are ongoing purportedly to be used as Personnel-Borne Improvised Explosive Device”

This is in addition to Vehicle-Borne Improvised Explosive Device, using especially Golf cars with registration numbers from states of the North,” the document stated.

To forestall a realisation of the terrorists’ plans, the DIA said it was directed to request the DHQ to instruct troops of Operation Lafiya Dole to maintain high alert and vigilance. It also instructed that troops at checkpoints should pay special attention to Golf cars, but approach such with caution.

The military, however, disregarded the instruction to stay on high alert, as troops were withdrawn from Dapchi in Yobe state, where over 100 school girls were kidnapped by Boko Haram from an all-girls high school on Monday 19th of February 2018, the girls were later taken to Kanama on the Nigerian-Nigerien border according to sources.

Deputy Director (Public Relations), the Theatre Command, Colonel Onyema Nwachukwu in a statement, said the military should not be blamed for the latest round of horror, as troops handed a peaceful and calm situation to the Police.  however, the Nigerian police has denied the claim, stating there was not proper handing-over done to their men.

The Commissioner of Police, Mr. Sumonu Abdulmaliki, said the military never handed over Dapchi town to the Police.

In a personally signed statement, Mr. Abdulmaliki explained that Yobe State remains a security emergency being monitored by security agencies.