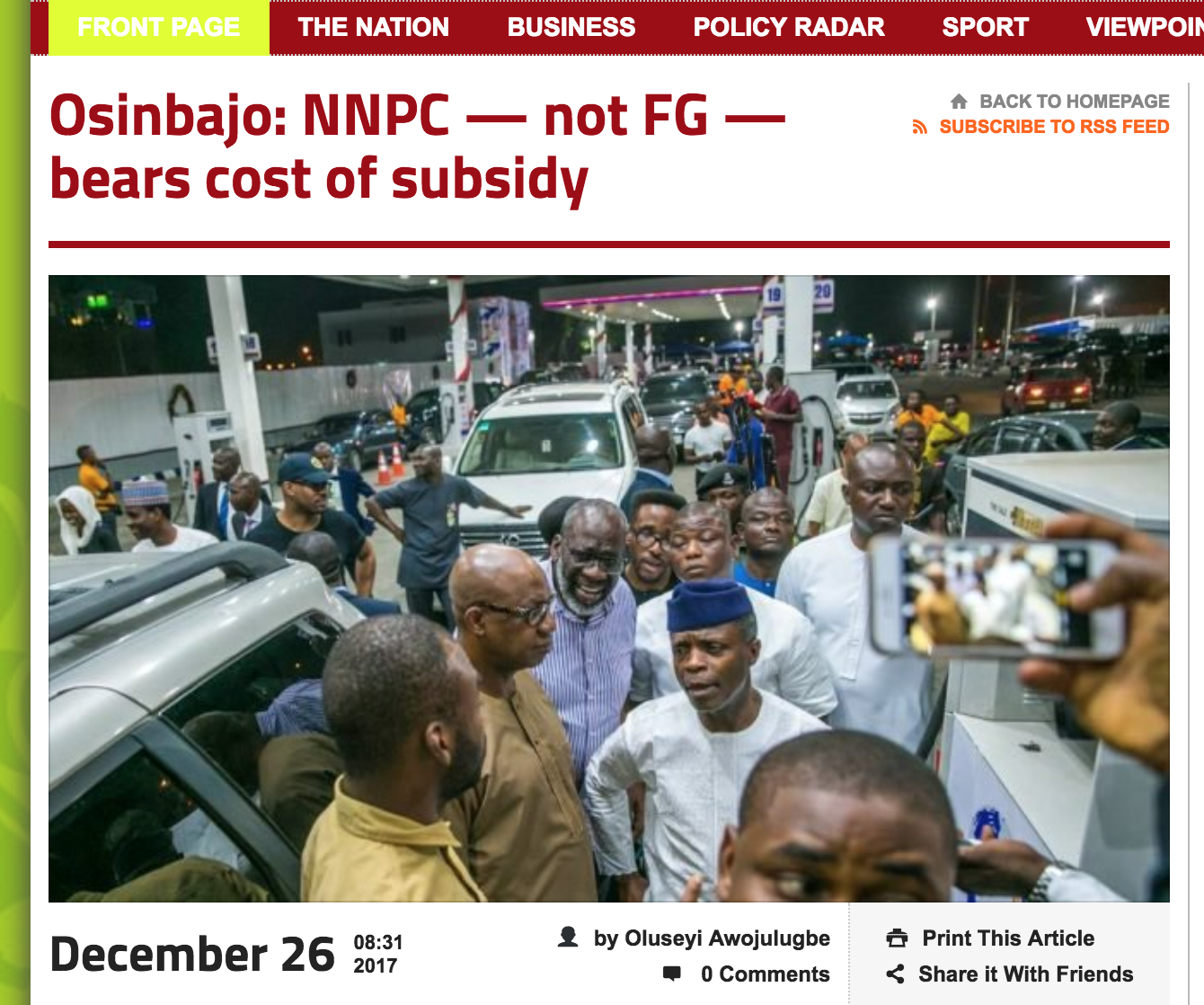 NAN reports that the vice-president clarified this on Monday while answering questions from journalists after visiting the Oando and Total depot in Apapa, Lagos.

“If you are buying and selling fuel, you would have to be able to pay for it. So, it’s not a question of government provision for subsidy, the federal government, at the moment, isn’t paying any subsidy.

“And don’t forget that the way that the NNPC trades is that, in many cases, NNPC is actually giving fuel; there is 445,000 barrels of fuel.

“So really what you are seeing, in many cases, is more or less an exchange for PMS. So at the moment NNPC is paying the cost.”

While speaking at a press conference on Sunday, Maikanti Baru, NNPC group managing director, had said that the landing cost of petrol is now N171 as against the official retail price of N145.

TheCable had reported that this would mean that the federal government would have to pay N40.70 as subsidy on every litre of petrol imported to retain the retail price of N145,

FLASH: @NNPCgroup is importing as much as 95% of gasoline using crude swap, the local refineries are barely working, accounts for about 5% of local consumption. 70% of the imports are sequestered to mushroom oil coys with connections to govt officials while 30% went to int’l coys

YES,THERE WAS A JETTISONED MEMO TO AUGMENT PREMIUM MOTOR SPIRIT(PMS) IN THIRD QUARTER ,2017
Do you know that in July 2017 ,Ibe Kachikwu ,Nigeria’s Minister of State for Petroleum did a memo to President/Minister of Petroleum ,Mohammadu Buhari on anticipated shortage of premium motor spirit.
In the memo,he surmised that short fall in PMS will become discernible from the early month of November 2017 and that by third week of November the shortfall shall manifest in long queues at filling stations.
He ended the brief by strategically recommending for early and quick augmentation of stock.
As usual,the Aso Rock Villa Cabal, led by Abbah Kyari,Buhari’s integrity challenged Chief of Staff muted and stayed action on the memo as the “originator” of the memo does not belong to the feudal overlords !
Today,Nigerians are at the receiving end and are suffering as a result of crass incompetence of a few masqueraders in the corridors of power whose parochialism and ineptitude have generally taken us fifty years backward ! What a shame of a nation !
For how long shall we continue to fall prey to sanctimonious idiots who have reduced governance to art of propaganda and misrule !
Circulate widely let their incompetence become notorious public knowledge !
From:
A CONCERNED NNPC STAFF