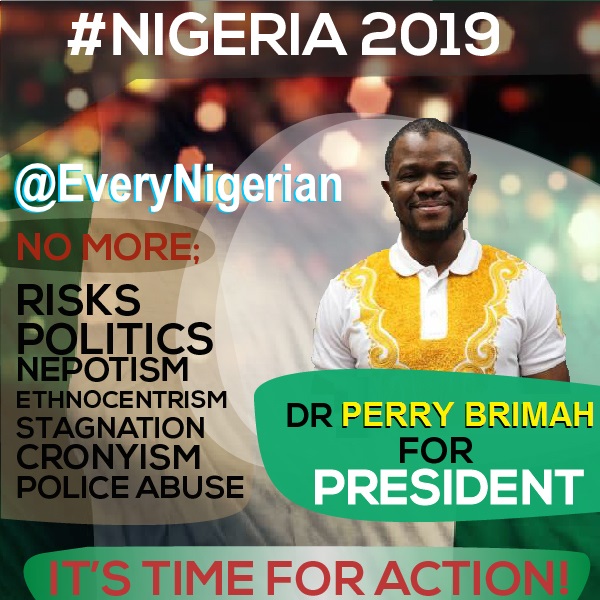 Why I Am Contesting To Be President of Nigeria in 2019 – Dr. Brimah

We hit the two year mark and I was very disappointed. We are in a recession not just economically but mentally. We have lost over 5 million jobs! The weak have become weaker while the wealthy still laugh to the bank. We do not know where or how our president is and we are not convinced of the powers our acting president has. We have begged and beg but the transparency we hoped for alludes us. They will tell us Buhari is hale and hearty and just resting. Are these the kind of dishonest and secretive people we shall continue to trust our nation in the hands of?

I am running for President in 2019 God willing because the more time passes, the more all we see is mediocre behavior. Political games and tickling at issues. Politics has destroyed all hope of real change we anticipated in this government. They cannot deal with the Senate because the Senate knows their secrets and knows all the corrupt political sponsors harbored in both parties.

This administration is beholden to the same cabal. The cabal is now once again deeply entrenched in partnership with this administration. The administration is scared to act because it is too intricately tied politically with the corrupt cabal party sponsors and with the PDP. Indeed we all know there is no difference. APC is just nPDP (new PDP). So many PDP have switched over to APC and now enjoy immunity; many are even government appointees. Nigeria PLC is in charge. I will dismantle Nigeria PLC once and for all to your pleasure. After 2019 they will never again have the freedom and audacity to converge their private jets bought from the pauper’s loaf to tie together their stupendously wealthy family lineages. I will make the insides of jail cells as familiar to them as it is to petty thieves. We will recover their loot as easy and fast as the Gambia recovered Jammeh’s property. We will see what we can adopt from the way China deals with corruption. We will dismantle the Senate and have a unicameral part-time and part pay single house.

We will reform politics and take the money out of it so we can have equal opportunity for all and harvest the best of Nigerians unlike today where the cabal and looters dictate and both parties violated the INEC spending cap. There is so much to do and God save me I will do it!

Buhari is perhaps too sick or too old or was never what we thought he is; or he has become too political. Keep your eyes on the Ikoyi $43 million; I assure you, you will witness “Government magic.” The cabal rule. All we see is the same cabal appointed to advisory boards across all arms of government. We see the same cabal who looted us dry as Advisory board to the Industrial committee, as chairmen of PINE for the northeast. All decisions are made by the cabal and for the cabal. And they get petrol subsidy, FOREX subsidy, tax waivers. Nigeria is cabal territory and if I do not lead this revolution now to take back government for the masses it will be too late. The cabal will buy up all the land and farms and power and other utilities and we Nigerian masses will be slaves to them in the type of oligopoly, the “Robber barons” that affected America that led to the trade unions revolution. We do not learn from the mistakes of the greed of others who have passed through the path we are taking. We are following the same steps that inevitably led to the French and American revolutions. We will all work for the cabal and when they deploy robots, that will be the end for us glorified slaves. Must we have a bloody revolution before we realize that this political and business monopoly is not sustainable? I say, I will lead the blood-less revolution politically in 2019 to save lives.

I am contesting for president because the “change” we voted for is not coming. Dasuki…they cannot bring to court because it is just a game. The war against corruption is a charade. No new courts or tools to fight corruption two years later. No serious sentences in two years. Shall we wait 10 years to see the well known corrupt senators, governors and ex-presidents in jail? Shall we continue to watch as switching to the ruling party guarantees immunity and even gives appointments? Terror Fulani herdsmen have replaced Boko Haram and the government like that of Jonathan has decided to look the other way and only unleash the security serves at peaceful youth protesters. Instead of catching terrorists the police extort us and fasten us to their vehicles to drag us inhumanely. Like the “civilized” world, I will remove the “force” from our police. I will return the army to the barracks.

Whoever needs a referendum, let them have it. No longer shall we stifle discontent. Our government will be one of enticement and not trampling. There is so much misplaced priorities, pain and poverty; we just cannot go on this way. If we wait Nigeria will explode.

This government is not what we hoped for. IT IS TIME FOR ACTION!

Join me! Shatter the two-party hegemony. Wake up all existing abandoned parties and register new ones. Contest for senate, for governorships. Let’s do this together and our grand children will say we were the GREAT ONES who dared to break the shackles and rescue their future.