In a latest development for Adamawa state, detectives from EFCC have stormed the Adamawa State House of Assembly grilling the leadership & some senior management officers of the house in an investigation of massive corruption and mismanagement committed by them.

Other areas that have been investigated by the EFCC include the N40M given to each of the members constituency projects, collection of kick backs from Mr. Bindow for wanton approval of loans without due process in violation of the fiscal responsibility act some of which were approved by few members without sitting in the state Assembly or knowledge of some of their colleagues almost on a monthly basis.

Bindow wrote a letter to the state Assembly in from June to 1st August 2015, requesting the House approval for loans of N8.2B, N12B and N7.2B 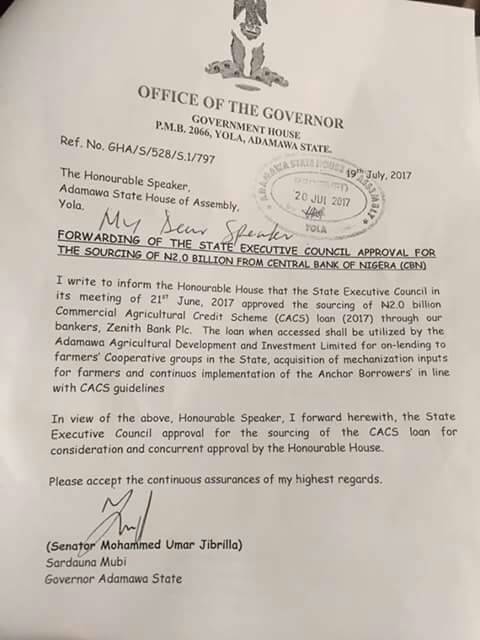 On 1st September, 2015 Gov. Bindow again wrote three other letters without cabinet extract seeking the House approval for another set of loans ranging from N18.2b, N9b and N21 and virement to pay 10% counterpart funding to the World Bank roads project in the state.

Subsequently other loans were also acquired in 2016 and 2017 (with an attachment as latest loan collected in July) which has catapulted the debt burden of the state from a mere N18B to close to N70B.

The objectives for which the gov’t acquired the loans was to complete the ongoing road projects left behind by his predecessors & to pay the outstanding salaries, pensions, gratuities & allowances of workers, all of which the governor has failed to comply after obtaining loans tripling the amounts needed & equally benefited from bailouts, Paris Club refunds & monthly subventions.

Sadly, most of these documents have been panel beaten (as the SSG usually boast) by DG Public Procurement Abba Bello & the SSG Umaru Bindir to evade EFCC investigators but the good news is that they are already in possession of the authentic documents.