If you can recall, two days ago a leaked video of the Hon. Commissioner of special duties to Governor Abdullahi Umar Ganduje of Kano state, Alhaji Abdullahi Abbas went viral on news and social media where the commissioner was openly calling for a planned systematic attack on the Kwankwasiyya supporters especially during the visit of former governor now senator Rabiu Musa Kwankwaso planned for 30th of January 2918. 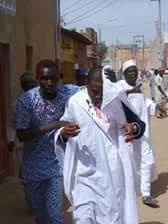 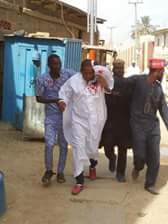 The call and opened support of this pre-planned attack on the kwankwaso followers by Abdullahi Abbas has yielded positive result as his blood brother named Walid Abbas Sanusi, who belongs to the Kwankwasiyya movement was attacked by motivated hoodlums suspected to belong to the Gandujiyya supporters who are the arch supporters of the present governor, Dr. Abdullahi Umar Ganduje. He was attacked and wounded today 14th January 2018. The reason for the attack is not yet clear but many have suggested that it was because he was seen wearing a red cap which is the symbol of Kwankwasiyya movement.

Others believed that he was attacked perhaps to send a massage, while others also believed Walid was attacked with the consent of his brother Abdullahi Abbas in order to put him into line due to his stubborness of sticking with the Kwankwasiyya movement.

Many believed more is to come because they said that the video showing the Hon. Commissioner inciting supporters have played great role in motivating this latest attack on the Kwankwasiyya members.

This is why many people in kano state are calling for a through investigation of the commissioner in order to unearth if there is any clandestine plan that may lead to the breach of peace within the state and equally prosecuted if found wanting.