A report released by the BBC has claimed that the Federal Government paid the sum of two million euros to Boko Haram to secure the release of the 82 school girls abducted by the Islamic terrorist group in 2014 in Chibok, Borno State.

The report also disclosed that the five Boko Haram Commanders who were swapped for the girls alongside the alleged sum were specialist in bomb making.

The Federal government has, however, not denied claims that there was negotiation with the sect members for the release of the girls.

The report reads in part, “The release of the 82 girls came with a price. Five senior Boko Haram militants were moved from a high security unit to be driven to freedom. The details of the deal are sketchy. 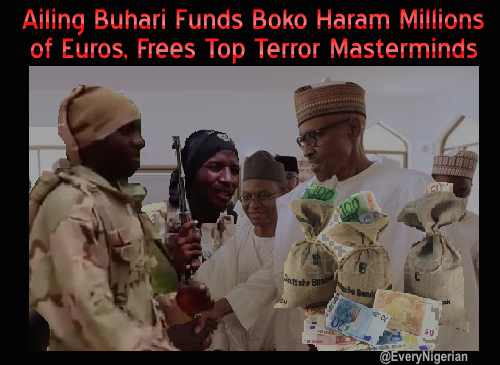 “Our sources don’t want to be named and their version of events is hard to confirm, but they say the men were high-level Boko Haram bomb-makers, and that they were accompanied by two million euros in cash.”

Quoting one of its sources, the report said, “Paying a ransom as well as swapping prisoners was a sticking point that almost unravelled the whole deal, one source tells us. It should have happened sooner, but the president was hesitating about freeing the five – and especially about the money.”

The report further quoted the source as saying Persuading the President was “very, very difficult. It was the most difficult part of the whole negotiation. He didn’t want to pay any money. “The ransom was two million euros. Boko Haram asked for euros. They chose the suspects and they gave us the list of girls who would be freed.”