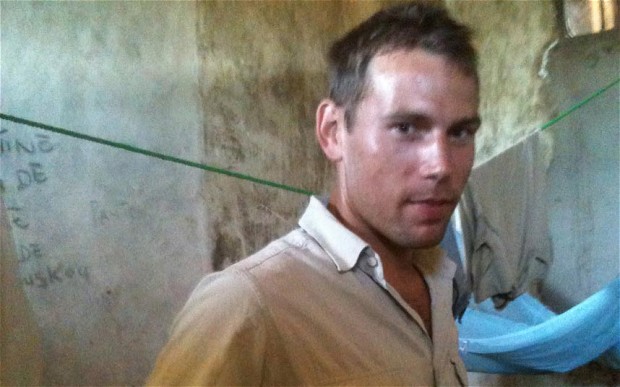 Inside the African jail hell of British pilot charged with murder

David Simpson, a bush pilot from Yorkshire, shows The Sunday Telegraph inside the African prison where he is being held for a murder he says he had nothing to do with.

David Simpson keeps a home-made baseball bat by the door of his cell. And sometimes, inside the prison in the Central African Republic, he has to use it.

“I was feeling sick and was lying on my mattress, when a guy crept in to steal my flip flops,” he said. “I had to chase him out, and floored him with a punch to the back of the head.”

When you are the only Westerner among 670 African prisoners, you quickly learn how to defend yourself. And Mr Simpson, 24, has been held prisoner in the Central African Republic, one of the world’s poorest nations, for four months.

While working as a pilot for a luxury game hunting company, the son of Yorkshire pheasant farmers stumbled across a massacre in the lawless east of the country. The area is known for rebel activity – in particular the Lord’s Resistance Army, led by Joseph Kony, which is strongly suspected of carrying out this attack.

He reported the discovery of the 13 macheted bodies to the police, but then, to his horror, found himself being locked up as a suspect in the murder, along with his colleagues. Of the 11 local staff imprisoned with him, many were hundreds of miles away from the murder scene at the time.

One man’s daughter has died while he was behind bars; others are suffering mentally, while Mr Simpson tries his hardest to keep their spirits up. When asked what he wanted bringing from the UK, Mr Simpson asked for gifts for the men. “It’s just incredible. I can’t believe we’ve been in here so long. They have no evidence against us, and all keep on telling us they know we’re innocent,” he said.

It is a question he has had plenty of time to ponder behind the thick, razor wire-topped walls of Ngarabara prison –originally built by the French colonisers in 1953, three miles from the centre of the capital Bangui.

“I had no option but to report the murders,” he said. “Some of the victims were relations of my local staff, who were hysterical. You can’t just brush off something like that.” Yet his moral compass has landed him behind bars.

The prison is the country’s main detention centre – although only around 70 of the inmates have ever been tried or convicted of a crime. The rest are in limbo.

It makes for a menacing environment. Soldiers lolling under the trees outside idly check the identification of visitors, but once inside the prison no one is in uniform. An unspoken hierarchy comes into play, with some inmates acting as guards in return for privileges.

A heavy padlock clangs open to let us in, while prisoners press against the gates glaring at the newcomers. Any food is immediately ripped at by hungry inmates; I hold on tightly to my bag and try to avoid eye contact. Inside the grassed courtyard, where David spends his time jogging, everyone is free to roam around; murderers mixing with political prisoners.

“They all know who I am, of course, but I generally try and keep myself to myself. When we first arrived the other inmates attacked our staff to steal their flip flops, and there was a huge fight.

“One of our staff picked up this guy and threw him to the floor, and for that he was put in ‘Porte Rouge’, the punishment cell, for an hour or so.

“It’s hideous in there; you can’t stand up and there is no toilet, with seven men crammed in and only a tiny window in the corner.”

Mr Simpson and the colleagues he is detained with have their own “wing” of the prison – a room above the other sections, guarded by the baseball bat and a door they padlock themselves at night, and furnished with mosquito nets and thin mattresses on the floor.

In the corner they store cool boxes containing food – “gozo”, a cassava mash, with meat sauce – provided by their employers: preferable to the filthy prison food that is prepared on charcoal stoves beneath their room.

Mr Simpson has a stack of books, while his African colleagues lie on their mats flicking through the pictures in Africa Today magazine; most cannot read the words.

He describes the conditions as “not that bad” – but hearing beatings by guards and gun shots in the night as desperate men try to climb the walls cannot be conducive to sleep. Those caught attempting to flee are brutally punished: in a chilling moment, he was among the inmates summoned to the courtyard to watch as the men were stripped naked, then beaten mercilessly with strips of leather. “The guards can be pretty nasty if they want,” he said.

One wing of the prison is nicknamed Iraq; another, “The White House”, contains all the political prisoners.

“They are the ones with more money, so the other prisoners try and work for them – make coffee, wash their clothes, run errands. Anything to earn some change.”

One man is behind bars for failing to dim his headlights as the president’s convoy passed; another, a cow herder from Chad, was imprisoned for five years because some soldiers heard a rumour there were rebels there. His family think he is dead.

Mr Simpson, who speaks the local dialect Sangho, translates for a Nigerian inmate – a retired policeman arrested while tending his garden in Bangui.

And he shares his food with an elderly man who was deemed to be a witch. “He could be my grandfather,” he said. “It just shows how desperate this country is, and how it really needs help.”

Another wing, Lollowacka, is home to the petty thieves – most of whom spend their days smoking weed, seated beneath a huge poster of Bob Marley. “You can pretty much get anything in here,” he said, as wheelbarrows of food were trundled in through the corridors. “For the right money. There is a self-appointed General in Lollowacka and he charges all the prisoners there 200 CFA (30p) a week in protection money.

“And of course everyone constantly asks me for money. It’s just so exhausting. I’m a pretty relaxed guy but sometimes I just feel like yelling ‘Do you think I’d be in here if I was that wealthy?'”

Of course he knows that, as a Westerner, he is unimaginably rich compared to most. The landlocked Central African Republic is consistently ranked as one of the poorest places on earth. GDP per capita is $447, while life expectancy for men is just 47 years. The country is rich with diamonds, gold, timber and minerals but government corruption means for most businesses it is just too much trouble to invest here.

Ever since independence from France in 1960, the country has been wracked by a succession of coups – most famously by self-styled “Emperor” and rumoured cannibal Jean-Bedel Bokassa, a man so vain that his lurid coronation used up the entire annual aid budget from France.

Perhaps unsurprisingly the current president, Francois Bozize, also came to power in a coup, launched in 2005 while the incumbent was abroad. Elections are held sporadically, but generally mean little.

“This country is ruled by whoever drives towards the presidential palace with the most men and the most guns, and manages to wrestle their way on to the throne,” said Erik Mararv, 27, the Swedish owner of the hunting company, who was born in the CAR, imprisoned alongside Mr Simpson and released on “sick leave” a month ago.

“If the people here were violent, there would be constant war. But thankfully they are a very peaceful nation, and just shrug their shoulders and get on with it.”

The chaotic political situation is certainly not helping Mr Simpson. On Monday (JULY 16) the justice minister, Firmin Feindiro, was sacked – reportedly for plotting a coup against President Bozize. He is said to have been thrown into another, even grimmer, prison,

Two judges have investigated the allegations against Mr Simpson and his colleagues – each investigation funded by the hunting company, which had to pay for transport, printing and even mobile telephone credit. A third investigation is under way but the presiding judge is said to be unwell, and needs to interview all 13 men before he can release them – so the waiting continues.

“The case file is probably 85 per cent complete,” said Alain Tolmo, chief prosecutor for the CAR. “It is progressing.” Leaning back in a luridly-patterned sofa inside the justice ministry, he said the case would be concluded “soon”. No one was clear what that meant.

Back in north Yorkshire, his family – parents Peter and Vicky, brother Paul and sister Helen – are stoic, trying to remain positive. David’s father refers to him as “The Beast of Bangui”, and asked whether he had got any entertaining tattoos while in prison.

“We honestly thought that with this third investigation he would be released,” said Peter Simpson, speaking by phone from the family home in Gillamoor, on the edge of the North York Moors.

“It’s been horrendous to be honest. We just can’t understand why it’s taking so long.”

The Foreign Office has offered consular assistance and their representative in Cameroon – they have no office in Bangui – visits as often as he can. But the diplomats maintain that they can’t interfere in another country’s judicial process – even in a country as chaotic as the CAR.

“It’s hard to explain to my parents really,” said David. “My Dad has hardly ever left Yorkshire so it’s not easy to imagine what it’s like.”

For all his current despair, upon his release David wants to go home for a few months but then intends to return to the CAR, and the job he loves. He admits his parents will not be delighted at his plans.

“It’s the most beautiful country, and I genuinely believe that we are doing good here by preserving the habitat,” he said.

“What makes me so frustrated is all this waste of time, when everyone knows we are innocent. The company is wasting time that it should be preparing for next season. My parents are wasting time worrying.

“And I’m just sitting around wasting my life.”