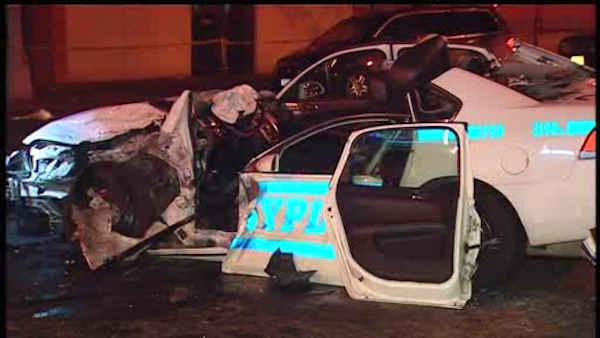 NEW YORK (WABC) — A Bronx deli employee is dead, apparently shot by police, and three men who were holed up inside the store are under arrest.

The incident began with a possible grocery store robbery on East 169th Street and Franklin Avenue in the Morrisania section around 2 a.m. Friday. It ended with three suspects being taken into custody around 6:30 a.m.

Authorities say the Natalie Grocery Store had just closed for the night when a passerby spotted a masked man pointing a gun at a clerk’s head inside and called police, who quickly responded and surrounded the building.

As officers arrived, the store owner was able to open the metal gate in front of the store and sneak out, walking towards officers with his hands raised. Another employee, his 23-year-old nephew, then followed. But witnesses say he did not have his hands up, and officers apparently mistook him for a suspect. That’s when police opened fire, hitting the man at least once.

He rushed to St. Barnabas Hospital, where he was pronounced dead.

A store employee, Jose Garcia, tells Eyewitness News that the victim was innocent, but was shot because he was running and didn’t put his hands up.

“The there people that were robbing the store, they ran to the back,” he said. “So that’s when the guy got up from the floor, opened the gate, came up with his hands up. His nephew, who was working with him that night, he was trying to follow him. But he ran, but he didn’t put his hands up. That’s when the police, he fell, and police shot him.”

Eyewitness News spoke to a woman who said she was in the store moments before the situation unfolded. She said she did not notice a robbery in progress, but was across the street when she heard all the commotion.

One suspect was quickly taken into custody as he attempted to flee the scene, while the other two holed up inside.

After a standoff of at least three hours, during which officers were concerned that a hostage was being held inside, the other two suspects were found inside the store by police.

Meanwhile, an officer was seriously injured when he was involved in an accident while responding to the scene. Link:

NEW YORK (WABC) — A police officer responding to the grocery store robbery and potential hostage situation in the Bronx was seriously injured when his cruiser collided with an SUV.

The crash happened about a mile away from the standoff situation, at the intersection of East 163rd Street and Third Avenue in the Morrisania section.

He was rushed to Lincoln Hospital with neck and back injuries. The injuries are not believed to be life threatening.

The driver of the SUV, identified by his wife as Andres Baez, was also rushed to the hospital. His wife says he was coming home from work when he was hit.

“My husband called the house, ‘I’m dying, I’m dying, the cop just hit me,'” Carmen Baez said. “We ran, because we live two blocks away. So that’s what we know. When we came, my husband was already in the ambulance.”

Investigators are trying to determine who was at fault in the incident. Link: http://abclocal.go.com/wabc/gallery?section=news&id=8801465&photo=1&pid=8801416