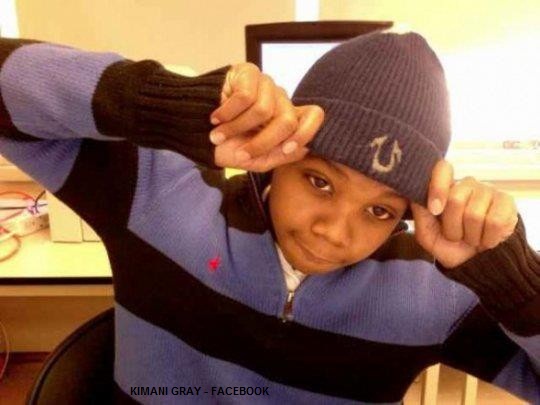 Kimani Gray was among a group of boys accosted by “plain clothes officers,” he reportedly ran from the cops and then at some point,  was shot “in the back.”

Witnesses said an older man went to his aid after he was shot and he uttered his last words, “please don’t let me die,” as he gripped his side. The man was pushed off by the cops who cautioned the dying Gray not to move for risk of getting shot again.

Police said that Gray had pointed a gun so they opened fire on him but witnesses deny their version of the story.

Tishana King, who saw the shooting from her Brooklyn apartment, told Kiss Detroit: “His hands were down. Kimani started backing up. The cop took his gun and started firing at Kimani. I couldn’t believe [the officer] let off his gun. There was no reason. No false move.” IbTimes

The two officers let off 5 and 7 shots, hitting Gray “in the back,” according to reports.

Following the death of Gray, who just had a baby, Brooklyn community has been up in riots against what they allege is police brutality. Shops have been vandalized for 3 nights since the murder and teens who know the alleys have been defying cops in continuous coordinated riots.

Police copters hover all night and footsteps of cops and citizens alike are heard over roofs all along Church avenue. Teens on rooftops have been tossing bottles and other objects from rooftops at officers below. An officer was said to have been seriously injured in the attacks and over 46 youth have thus far been arrested.

Brooklyn streets and subways are loaded with plain and uniformed cops and many streets are cordoned.

Kimani Gray’s mom’s grief can not be imagined, she recently lost one of her other two sons in an automobile accident and the last of her boys lies in a comma. She was supposed to make an appearance and speech along with other mother victims of police killings Wednesday before the peaceful gathering broke into a riot.

The grief among Brooklyn inhabitants can be appreciated from a comment by an acquaintance of Gray who said, “I just do not understand why it is so easy for the cops to kill a black teen, for allegedly having a gun, while a white man who shoots up and kills several in a Colorado movie theater is caught alive. And I’m not even sure Gray pulled out a gun!”

Police are expected to be out in full force Thursday night to control the expected continuation of the rebellion.