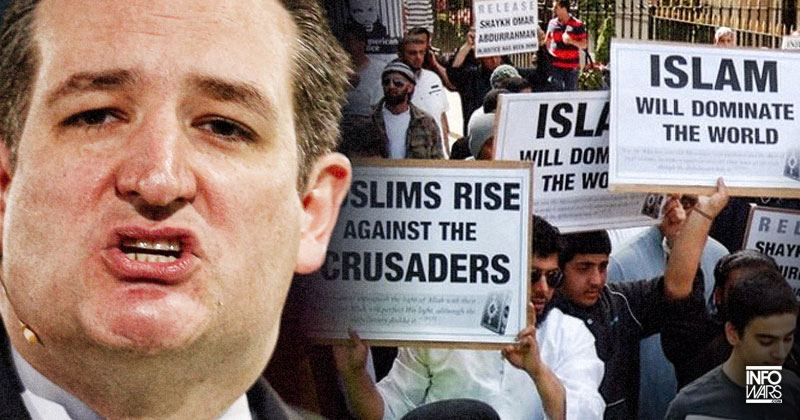 “Special relationship” between US and Saudi Arabia responsible for Wahhabi terror

Presidential candidate Ted Cruz sidestepped his proposal to patrol Muslim neighborhoods Wednesday during and interview with “Good Morning America.” He said the United States should target radical Islam in general, although he did not provide specifics.

On Tuesday after the attack in Brussels Cruz called for law enforcement to step up patrols of Muslim areas in the United States.

“If you have a neighborhood where there’s a high level of gang activity, the way to prevent it is you increase the law enforcement presence there and you target the gang members to get them off the streets,” Cruz told CNN’s Anderson Cooper. “I’m talking about any area where there is a higher incidence of radical Islamic terrorism.”

Police patrols in high crime areas in New York and a Fourth Amendment busting stop and frisk policy have had only a marginal impact on crime rates in New York and a similar tactic used against Muslims would be counterproductive. A heavy presence of cops will not moderate the Salafist ideology.

The Salafist and jihadist ideology behind terror attacks in Brussels, Paris and San Bernardino is a product of Wahhabism, an offshoot of Sunni Islam and the official religion of Saudi Arabia.

Prior to the 9/11 attacks Wahhabism had at best a marginal footprint in the United States. “80 percent of the 1,200 mosques operating in the US were constructed after 2001, more often than not with Saudi financing,” notesWorld Affairs. “As a result, Wahhabi influence over Islamic institutions in the US was considerable by 2003, according to testimony before the US Senate. Hundreds of publications, published by the Saudi government and its affiliates, and filled with intolerance toward Christians, Jews, and other Americans, had been disseminated across the country by 2006.”

The Saudis have spent billions to propagate the intolerant and hateful ideology of Wahhabism. “Between 1975 and 1987, the Saudis admit to having spent $48 billion or $4 billion per year on ‘overseas development aid,’ a figure which by the end of 2002 grew to over $70 billion (281 billion Saudi rials). These sums are reported to be Saudi state aid and almost certainly do not include private donations which are also distributed by state-controlled charities. Such staggering amounts contrast starkly with the $5 million in terrorist accounts the Saudis claim to have frozen since 9/11,” writes Alex Alexiev.

The US government has encouraged the spread of radical Wahhabism by coddling the Saudi Arabian government and insisting America shares a “special relationship” with the kingdom. The blind eye turned toward Saudi Arabia and its deplorable record in human rights was demonstrated when it was elected to the UN Human Rights Council (in fairness, the vote is primarily the fault of the UK—the British government also shares a “special relationship” with the medieval kings of Saudi Arabia and has allowed the virus of Wahhabism to spread in Britain, hence the term “Londonistan”).

Infowars readers are well aware radical Islam received a tremendous boost when the US launched its covert war against the Soviet Union in Afghanistan, an effort largely attributable to the globalist Zbigniew Brzezinski.

“What is most important to the history of the world? The Taliban or the collapse of the Soviet empire? Some stirred-up Moslems or the liberation of Central Europe and the end of the Cold War?” remarked Brzezinski in the wake of an effort that ultimately resulted in the death of at least 400,000 people (Oxfam claims no less than 870,000 Afghans were killed between 1978 and 2009).

The United States and Saudi Arabia collaborated on the project in Afghanistan. This bloody effort reached its climax under the beloved American president, Ronald Reagan, who described the radical and brutal Wahhabi Mujahideen that would go on to become the Taliban and al-Qaeda as freedom fighters.

The United States directly funded the effort to turn Afghan school children into terrorists by spending millions on textbooks “filled with talk of jihad and featured drawings of guns, bullets, soldiers and mines… since then [the literature has served] as the Afghan school system’s core curriculum. Even the Taliban used the American-produced books,” The Washington Postreported in 2002. The 9/11 report described Pakistan’s madrassas—Wahhabi schools funded by the Saudis—as “incubators for violent extremism.”

The “incendiary, foolish statement”—according to the NYPD—made by Cruz about Muslim neighborhood patrols completely sidesteps the real issue: the creation, promotion and support of Wahhabi terrorists by Saudi Arabia and the United States. This reality is not a conspiracy theory. It is well documented by government reports, newspaper stories, and scholarly research.

Cruz is merely attempting to hitch his political ambitions to the largely manufactured war on terror. As a political opportunist supported by Goldman Sachs, the CFR and the establishment he must embrace the terror war narrative and its lies, delusions, omissions and misrepresentations of truth.

If Ted Cruz manages to win the Republican nomination in November and become president (an unlikely prospect at this juncture), he will continue the foreign policy of his predecessors—endless war, incalculable murder, and ultimately the collapse of the United States.