June 15, 2012
The body of Dr. Timothy V. Jorden, the trauma surgeon suspected of killing his ex-girlfriend Wednesday, was found near his home today with what appeared to be a self-inflicted gunshot wound, officials said.

Jorden was wearing scrubs when his body was found beside a creek in a wooded area near his Lakeview, N.Y., home. Police said they were able to identify the surgeon by his tattoos, but they declined to specify where he shot himself.

Jorden, 49, was wanted in connection to the death of his one-time lover, Jackie Wisniewski, 33, a nursing student who died Wednesday morning on the floor of the Erie County Medical Center.

The trauma surgeon, who also had Army weapons training, was considered armed and dangerous. He was the target of a hunt by local, state and federal authorities, including the U.S. Marshals and the FBI.

The fatal drama at the hospital began around 8 a.m., when Jorden allegedly shot and killed Wisniewski, a woman identified as his former lover, according to sources familiar with the investigation. She was found dead in a covered passageway joining the hospital’s Kidney Center and another wing of the medical center, The Miller Building, WKBW reported.

Buffalo police, backed up by a New York State Police SWAT team, converged on the hospital and locked down the facility, treating the situation as an active shooter scenario. The lockdown was lifted at noon, but no news emerged as to the circumstances of Jorden, who was officially described as a person of interest.

Jorden had experienced emotional difficulties recently, according to officials, who did not elaborate.

A career soldier, Jorden graduated from the University of Buffalo School of Medicine in 1996.

“I’ve wanted to be a doctor since early in my military career as a medic,” Jorden told the newspaper in a 1996 profile.

Francisca Wellsbury, who was married to Jorden, but long divorced, told ABC News that she was shocked by the news that her ex-husband had become the suspect in a murder. 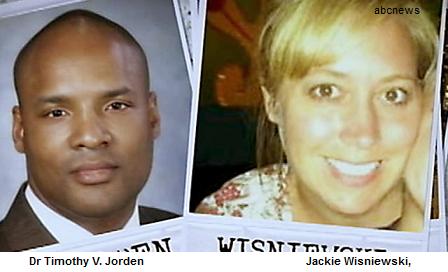 “We’ve lived separate lives for a long time,” Wellsbury, who lives on the West Coast, told ABC News. “I’m just as shocked as anyone. It’s traumatic.”

She declined to go into further detail, but said: “This is not the person I knew. I wish he would seek help.”