President Muhammadu Buhari has allegedly ordered the resignation of the former Governor of Rivers State who is now the Minister of Transport, Rotimi Amaechi.

Also alleged to have been asked to resign are Minister of Power, Works and Housing, Babatunde Fashola and Chief of Staff to the president, Abba Kyari over various allegations of corruption, DAILY POST exclusively gathered.

A source in the Presidential Villa told DAILY POST that Buhari worried that having these persons in his cabinet could put so much to question about his personality and frustrate the present anti-corruption war had advised them to quietly resign.

The source also said the President reminded them of his earlier warning that if he sacked any of his appointees, such would be prosecuted.

It would be recalled that there had been several allegations of corruption flying in and outside the media about Ameachi. A leading Newspaper in the United Kingdom, UK, ‘The Mail Daily,’ on Sunday, May 15, 2016 published a report revealing how Rotimi Amaechi allegedly looted Nigeria’s treasury.

The report claimed that President Muhammadu Buhari’s ‘fantastically corrupt” friend, spent over $140 million on the president’s 2015 campaign and has been accused of stealing £500 million.

Also a Judicial Commission of Inquiry in Rivers State had allegedly indicted the former governor for looting the treasury of the state, when he served as Governor for eight years. Amaechi had, however, denied these various allegations.

His contemporary, Babatunde Fashola, had equally been petitioned over mismanagement of Lagos state funds. It would be recalled that the Economic and Financial Crimes Commission, EFCC, was petitioned by the Civil Society Network Against Corruption, a coalition of anti-corruption organisations in Nigeria, over an alleged “questionable expenditures” of the administration of Babatunde Fashola. He allegedly approved before he left office, N78.3 million from the state’s treasury for an upgrade of his personal website, an allegation he had since denied.

Relatively, it has been alleged that the Chief of Staff (CoS), Abba Kyari, took N500m from operators of MTN to help the telecommunications giant mitigate the fine imposed on it by the federal government. 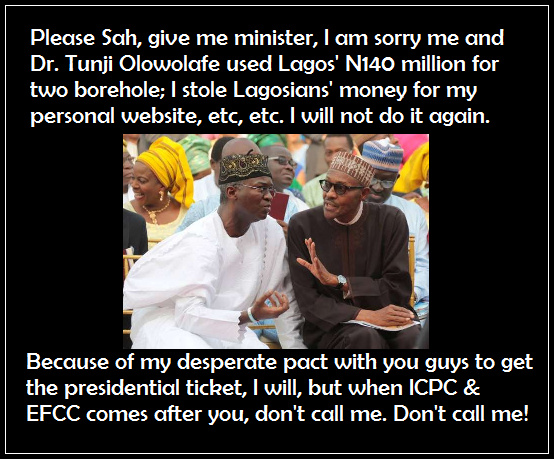 ”The president has been waiting patiently for them to resign,’’ The source stressed.

When DAILY POST contacted the Senior Special Adviser to the president on Media and Publicity, Garba Shehu, he simply said in a text message thus; ‘’I am sorry I am in Abuja and I can’t confirm or deny the report with the president who is now in London. If you can leave me out of this, I will appreciate.’’

Recall that President Muhammadu Buhari recently suspended the Secretary to the Government of the Federation, SGF, Mr David Babachir Lawal and ordered an investigation into the allegations of violations of law and due process made against him in the award of contracts under the Presidential Initiative on the North East (PINE).

The President had equally ordered a full scale investigation into the discovery of large amounts of foreign and local currencies by the Economic and Financial Crimes Commission (EFCC) in a residential apartment at Osborne Towers, Ikoyi, Lagos, over which the National Intelligence Agency (NIA) made a claim, hence suspending the DG, Ambassador Ayo Oke.

The investigation is also to enquire into the circumstances in which the NIA came into possession of the funds, how and by whose or which authority the funds were made available to the NIA, and to establish whether or not there has been a breach of the law or security procedure in obtaining custody and use of the funds.

Meanwhile, when DAILY POST contacted Fashola’s Media aide, Bello Hakeem, he listened carefully but hung up. He rejected all other calls put across to him to get Fashola’s reaction.