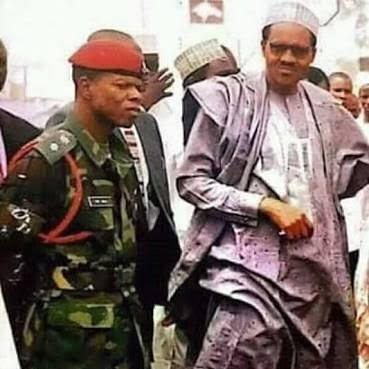 The Comptroller-General of the Nigeria Customs Service, Hameed Ali, on Friday declared that President Muhammadu Buhari has “derailed” barely two years in office, but blamed the Peoples Democratic Party for obstructing the president’s efforts to make Nigeria better.

“There is no doubt that we have derailed because we are not doing what we say we want to do,” The Nation reported Mr. Ali, a key ally of Mr. Buhari, as saying.

He quickly held the opposition party responsible for Mr. Buhari’s failures, saying PDP loyalists occupy as many government offices as members of the ruling All Progressives Congress.

His comments came when he opened a new office for the Buhari Support Organisation in Abuja.

The Plateau State Governor, Simon Lalung, whom The Nation reported was at the event with Mr. Ali, also supported the Customs’ boss comments, praising him for displaying uncommon courage.

“It requires very courageous people to come out and say these things are wrong,” Mr. Lalung said, adding that other APC governors have also complained to Mr. Buhari about the influence of non-party members to the detriment of those who worked for the party’s success in 2015.

Mr. Jonathan swiftly reacted to the statement, signed by Garba Shehu, saying it spoke to the “uncoordinated and rudderless” turn Mr. Buhari’s government had taken.

A spokesperson for the PDP, Dayo Adeyeye, did not immediately respond to PREMIUM TIMES’ requests for comments about Mr. Ali’s attacks Friday night. But political analysts see the Customs chief’s comments as particularly instructive given his closeness to Mr. Buhari.

“These comments should worry all members of the Buhari administration because of where they’re coming from,” said Gbola Oba, a political analyst and automobile expert. “Mr. Ali is one of the strongest allies of the president.”

Consequently, Mr. Oba said the ball has now been punted back to Nigerians to draw their conclusions about the Buhari government.

“He’s half-right and half-wrong,” Mr. Oba said. “It is not in doubt that Buhari government has failed as his close ally has disclosed, but they cannot blame others for their failures.”

In blaming the PDP, Mr. Ali said Mr. Buhari had failed to implement the winner-take-all tactics.

“Let me say that in the course of the jihad of the Prophet Mohammad, anytime they go out for a battle, they come back with loot, but this loot, as far as my own research told me is not distributed to everybody, but to those who took the sword and faced the enemies,” he said in apparent allusion to the contribution of APC members to the party’s victory in 2015 elections.

The election saw the emergence of Mr. Buhari as the country’s president, 30 years after he was deposed as a military head of state.

But the administration has suffered huge blows about two and a half years on, especially in areas of social and economicchallenges and even the in the war against corruption.

Mr. Ali said things would have been brighter for the government if all key positions in government had gone to loyal members of the APC.“But I must confess here that we have been infused by people who were not part of this journey and these people are the ones that call the shots today,” Mr. Ali said. “That is why we are derailing. If we had the right people who had the vision and have been there in and out, I believe that we will not be going the way we are going today.”

Analysts could not immediately understand how Mr. Ali arrived at his conclusion that the opposition has a lot of say in Mr. Buhari’s government.

This is because Mr. Buhari did not appoint anyone from the PDP or any other opposition party in his cabinet ; unlike President Umar Yar’Adua who convened a government of national unity by inviting opposition parties into his cabinet as a way of moving past election season bitterness.

“The truth is that Nigerians know better: PDP is no longer in government,” said political analyst Victor Okhai.

Mr. Okhai, a career criminologist, said the only association PDP has with the APC government was the decision of the now ruling party to admit many PDP loyalists into its folds shortly after it was formed in 2013.

“When the APC was formed in 2013, the party’s leaders started poaching PDP bigwigs,” Mr. Okhai said. “By the time the country went to poll in 2015, many of the APC leaders were serving PDP governors and federal lawmakers.”

Mr. Okhai said it was unsurprising that the APC has failed within two years like the PDP through its 16-year rule.

“Of course, the PDP was a failure, so the APC has also failed because the party was created based on the foundation and resources of the PDP,” Mr. Okhai said.

Notwithstanding, the criminologist said the APC must take responsibility for its failures, drawing an analogy from a newly-hired coach of a football team.

“When a team hires a new coach, it is expected that the new coach will make immediate changes that will guarantee success,” Mr. Okhai said. “You cannot say because you inherited bad players you couldn’t perform, especially when resources had been provided for new players.”

“The other day it was Garba Shehu and today we have Mr. Ali, this could very well be one of their main campaign slogans,” Mr. Oba said.

“The APC will blame the PDP for infiltrating its government to constitute a major impediment to new changes,” Mr. Oba said.

He, however, said such claim would be a tough sell to Nigerians,  who are becoming increasingly aware of “insulting political gimmicks by politicians.”

Mr. Ali, who coordinates the Buhari Support Organisation, implored members of the group to remain steadfast in their quest for good governance.

“I will, therefore, ask my colleagues of the BSO to go back to the study room