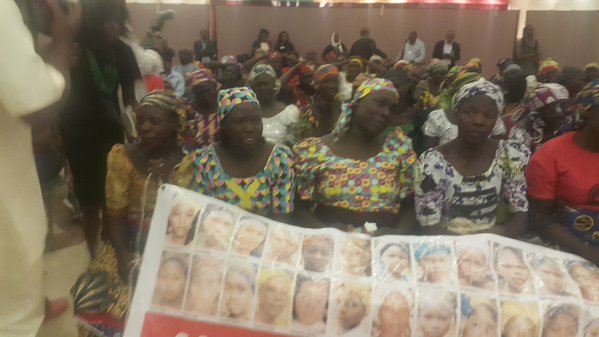 We thank the Bring Back Our Girls Movement (BBOG) for a good event. But that is not to say that all of the accounts of the meeting on Twitter are accurate.

President Buhari could not have stormed out of his meeting with the Chibok parents, stakeholders and the BBOG. He was called to speak at a meeting he did not start. He did his part and left so that the meeting would continue. It is simple meeting procedure. He had to leave without being disruptive. That is what happened. The ministers did not even escort him. They stayed back to conclude the meeting.

I thought that the President should be praised for ending his meeting with a foreign leader to come, and for the courtesy and respect he showed to the parents and the BBOG, which is undoubtedly Africa’s best known social action movement.

We asked cameras out for two reasons. Sensitive security information may be disclosed. Two, privacy is not unusual with leaders around the world when they meet families in grief. We didn’t want anyone to get the sense that the President was exploiting their images in a photo op.