The Emir of Kano, Sanusi Lamido Sanusi II, has stated that the practice of letting Nigerian businessmen buy dollars at official rates and then resell at higher rates on the parallel market is still going on in the Buhari administration.

Giving a speech at the 15th Joint National Council on Developmental Planning meeting held in Kano recently, Sanusi said, “We have created our own billionaires since 2015 from foreign exchange subsidy.”

During the speech titled: “Nigeria – The Search For A Growth Model“, Sanusi stated that the businessmen get the dollar at N197 and then price their goods at N300 – something which has been hugely detrimental to the forex system.

“For instance, when the CBN was selling dollar at N197 and people were buying at N300, if I sit down in my garden and pick up my phone I would have enough people to call in the industry to get 10 million dollars at officials rate and sell at N300 and make a profit of over N1bn and if I do that four times in a year. For doing nothing I would have earned N4bn.

*The same margin facilitating the corruption has been maintained with the new difference, CBN dollars for N310 while parallel market goes for N477.

“And people were telling us that this policy was to help the poor. We should not devalue because if we do the poor people would suffer.

“… People that were profiting from this were the ones telling the government that if you devalue people would suffer; meanwhile they all got the dollar at N197 and price their goods at N300 (*maintained still with same margins at N310 and N477).

“The poor paid the price of the devalued currency and the rich schemed up the profits and it went on for one year and we talked and talked and talked. “If the present administration continues to behave the way the immediate past government behaved, we will end up where Jonathan ended. You may not like it but that is the truth,” he said. 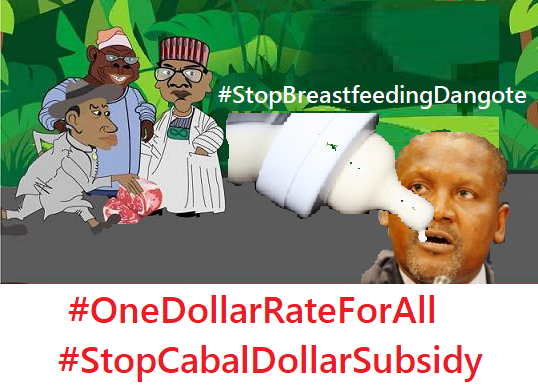 The Emir also added that no one needs to be an economist to realise that any system that allows someone to make N1 billion profit through a phone call without investing a dime is a wrong system and is not sustainable.

Sanusi pointed out that for every billion dollars that was taken out of the federation account and sold by the CBN at N197, the country was losing at least N100 billion that could go into healthcare, agriculture, and salaries.

Furthermore, the Emir also said that the current economic situation of the country was a direct result of the inability of past governments to diversify the economy.

“If we do not expand the economy through wise investment, we can end up in classical Malthusian situation,” said Sanusi.

Sanusi lamented the country’s situation saying that despite Nigeria’s past experiences, the country is still making the same mistakes.