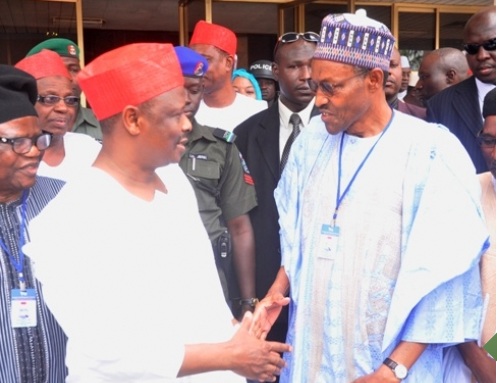 Former Head of State and 2011 Presidential candidate of the Congress for Progressive Change (CPC) Muhammad Buhari has asked the Federal Government to do everything possible to tackle the insecurity challenge currently pushing more people into ‘real poverty’ in parts of the north.

Buhari, who made the call during a visit yesterday to the Kano State governor, Rabi’u Musa Kwankwaso, described the security situation in Kano and some states in the region as ‘extremely sad,’ stressing that trade and other economic activities have been seriously stifled.

“I came to greet the Emir of Kano and to sympathize and commiserate with you and him over the unfortunate incidents of bombings and the extra security measures being taken that are affecting our people,” he said.

Buhari, who was in the state to commission CPC secretariat, lamented that Kano which used to be known worldwide as a centre of commerce, is now a shadow of its former self. “It is extremely sad, but I hope you will see through it as soon as possible,” he said.

According to Buhari, even with the death of industries and security measures being taken in Kano, not everyone had initially realized the enormity of the situation to the economy of the country, “until the problem of Borno and Yobe got out hand.”

“Having been a governor in that area, I knew that everyday at least 200 articulated vehicles leave here for Maiduguri and from the same end coming down this way. There in Maiduguri, you get traders from the Cameroon, Chad and Niger. Now all these have virtually gone. Try to imagine how many Nigerians and in particular, how many people from this part of the country are now pushed into real poverty,” he said. “I hope the government at the centre will do all it can to ensure the situation is reversed as soon as possible.”

Buhari also told the gathering that CPC was opening a secretariat in Kano in order to settle down and play the role of an opposition, given that the internal squabbles affecting it had been resolved.

Governor Kwankwaso said his government was working with security agencies to remove checkpoints in the state as soon as possible, so as to allow free movement of goods and persons in and out of the state.

Kwankwaso commended Buhari for finding time to pay him courtesy call despite their different political party affiliations. “What General did is what all politicians are supposed to do, because being in different parties does not mean being enemies,” he said.  -DailyTrust