Nigeria’s 8-month President Muhammadu Buhari has gotten himself into the wrong war against Boko Haram with deadly consequences for the people. And you don’t have to take my word, take it from his own admission: President Buhari said, via his media spokesperson Garba Shehu, in response to recent deadly attacks on Chibok and Dalori, that the terrorists were “so desperate to embarrass the government and the people that they have no qualms attacking isolated communities and markets.”

As Buhari told his peers in the U.A.E that he had driven Boko Haram into a “fall-back position,” the terrorists responded by striking Dalori and neighboring communities at the door-step of the North-eastern State capital, killing as many as 300 according to local tolls, in one of the most vicious attacks in recent times and the worst of 2016. People were locked in their homes and entire families screamed as they were burned to death by tossed fire bombs. Boko Haram had responded with wanton killings to embarrass Buhari.

The Christmas Deadline And Maiduguri Massacre

It was a pattern that had repeated itself enough times for the Presidency to notice. Last year December as the Presidency, pressed to prove that they had achieved a self designated deadline to defeat Boko Haram, announced the “technical defeat” of the terrorists, the unscrupulous and unrelenting militant army struck the heart of Borno itself. In a daring attack, they crossed the rampart and penetrated Maiduguri, the “safe” capital city of Borno. It was the first time in months or even years that the terrorists had successfully attacked the capital. As is their vile pattern, they locked people in their homes and burned them alive, running along and mingling with crowds in Jidari Polo before they retreated of their own will. Dozens were killed in a shocking successful attack on the safest city and center of governance of the State. This was so embarrassing to the Buhari government that they denied the attack on the capital in entirety to the displeasure of the citizens and victims. The residents of Maiduguri would later protest that the point of entrance of the terrorists was still left unsecured.

All Because Of One Deadly Mistake

This unusual and quite deadly publicity war between Boko Haram and Buhari started, not because of Jonathan, the former President; he cannot be blamed for this. It also did not start by Boko Haram’s choice. This was an error from Buhari’s side. Perhaps his National Security Adviser or perhaps his Army Chiefs or the entire team. It all started when a new government that had every reason not to, decided to select a random date and make an over ambitious promise to defeat the insurgent capacity of Boko Haram by it. On some very foolhardy advice, Buhari promised to defeat Boko Haram’s territorial holding and insurgent capacity by December of 2015. This promise was immaturely made, careless and overambitious, lacking in proper and credible estimation of the depth, intricacies and complexities of the Boko Haram terror network. Of course, we are not privy to whatever hidden information they had in believing they could set such date or secret planned method, but the result of this blunder judges.

Building On A Mistake

It’s the, “better quit at one mistake” tale. There was no error in President Buhari tasking his military to achieve success by December or even earlier; but it is the duty of a professional and responsible thinking military to inform him as they go forward that the deadline is not practical; and it would have been safer for Nigerians and more dignifying assuming they had they done so, for him (President Buhari) to have simply told the country that they tried their best but could not meet the hoped-for deadline. This would have stopped the next series of deadly and destructive blunders and massacres that continued to build on that one single mistake.

First about 105 soldiers went “missing” or were killed as the army had been touting its successes and the military tried its best to deny the happening, denying the dead soldiers their dignified burial and national prayers. The army had to prove that it had miraculously turned itself around from an accused, dysfunctional army through the Jonathan years into a hyper-efficient and perfectly capacitated killing force. CoAS Buratai would want us to believe that push-ups and breaking-bread had miraculously made the needed difference.

Next the military hurriedly burned down swathes of Sambisa forest ahead of the December deadline in desperate bid to meet the “mistakenly” chosen deadline. This was a dumbfounding purposeful ecological disaster ordered by Nigeria’s reckless military, and another horrible compounding of blunder #1.

And the errors and desperation to cover-up kept piling on each-other. The Army Chief kept trying to artificially “procure” the victory for Buhari as the military kept denying Boko Haram attacks and cutting down the numbers of poor dead victims, just to prove that they had succeeded. And as Buhari kept waging this war against himself, Boko Haram kept responding to the Buhari-Military self imposed challenge, making sure to “embarrass” them at every turn. As we have mentioned before, Boko Haram has sinister and well placed sponsors within Nigeria and far away abroad that Buhari has not yet apprehended. These people watch the news and when they see Buhari declare a victory, they tell Boko Haram to make it’s rebuttal. Victims: innocent Nigerians. It has been poor and desolate Nigerians that have continued to die in the cross-fire of the battle of the egos of Buhari, Buratai and Boko Haram.

300 terrorists attacked six villages in Adamawa in the typical Boko Haram pre-dawn raid, burning everything in sight and retreating into Boko Haram’s very own Sambisa home and the military seriously edited the story.

Every day they announced that they had finally cleared all Nigerian territory of Boko Haram, the next day, if it wasn’t Boko Haram that busted their claim with a new attack, they (the military) themselves announced they had just liberated 1000 Nigerians… from where? Well not in caves or from outer-space, so obviously these poor betrayed victims of such a large number had been living captive in Boko Haram territories the military had just inconsiderately and harmfully claimed did not exist. This cycle and war with the wrong enemy has continued till this week.

It is impossible to tell who is to blame for this continued deadly embarrassment and wound that refuses to heal. There is nothing the Buhari administration has to prove. This government has all the goodwill from desperate and bleeding Nigerians that any needs. No one blames it for the stage Boko Haram is at today. The people understand that this was inherited. There is no way a terror army that had numbers in the range of over 20,000 would just disappear in a day. We remember when former President Jonathan was drilled by the BBC when he claimed he had defeated the terrorists and he tried to respond that the thousands of them had “slipped back into society and others had gone back to Niger, CAR and other places from whence they were hired.” It did not sell then and not now either. Nigerians are tired of Jonathan’s Gwoza human-legged-signboard lies and pages from the same book. It is actually extremely dangerous to continue to try and disappear the menace if it still exists. Nigerian army announcing false successes allows the people to drop their guards and is causing more harm and death to the people. Just call it a mistake and let us move on. 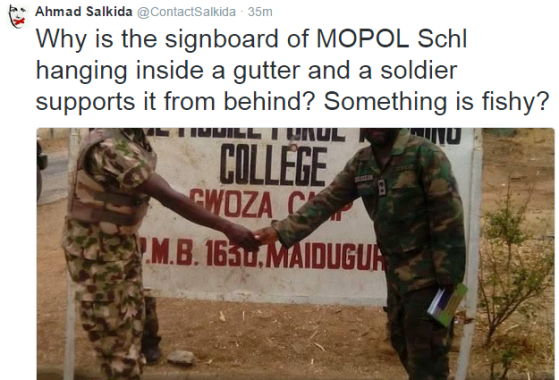 The War Is About Nigeria Not Buhari

The war against Boko Haram is not about Buhari’s government but about Nigerian lives. Yesterday a prominent Borno elder, Professor Khalifa Dikwa complained about the lack of government attention to the Dalori crises and its aftermath. Similar complaints have been made about Chibok, Adamawa’s Girei and other affected localities. The people need the truth; they trust that the Buhari government has their best interests at heart, and whether it will take long or short, they will wait the haul for this scourge to end and end finally. The people, Civilian-JTF, hunters and other patriots are waiting with their offer to join and assist the battle-weary, PTSD’d army conquer back Nigeria. The army promised to integrate them but as happened through the Jonathan era, the promise appears to hold no water.

Buhari should not allow his over flowing support and goodwill to gradually erode with many of us who supported him through thick and thin and particularly in the most affected areas where the victims read the distorted stories in the media and feel the neglect, the pinch and notice the government avoiding them to maintain its mistake narrative. And he should please take off the kid gloves, soft approach and Zaria the Takfiri terrorists.