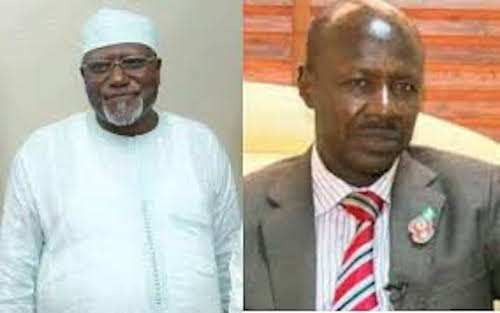 The Senate was on Wednesday thrown into a rowdy session when a lawmaker, Biodun Olujimi, accused President Muhammadu Buhari of losing authority on his administration.

Mrs. Olujimi, PDP-Ekiti, was responding to a motion on the face-off between Nigeria’s security agencies raised by Dino Melaye, Kogi-APC.

Officials of the State Security Services, SSS, and the Economic and Financial Crimes Commission, EFCC, were involved in a showdown on Tuesday when EFCC operatives attempted to arrest the immediate past Director-General of the SSS, Ekpenyong Ita.

A similar scenario also played out when SSS operatives prevented the anti-graft agency from arresting the former Director-General of the National Intelligence Agency, Ayo Oke.

Presenting the motion, Mr. Melaye called on the Senate to take an urgent action on the incidents he described as “recipe for national disaster”.

“Mr. President, the media and the social media, print and electronics have been awash with a disaster that took place yesterday. The EFCC went to the residence of the former Director General of the SSS, Ita Ekpeyong, to effect an arrest and the Directorate of State Security stopped the EFCC from arresting him. That created environmental brouhaha. The whole environment and neighbours were stopped from lawfully gaining entrance into their homes because of this confusion.

“Same yesterday, the EFCC wanted to arrest the former DG NIA, Mr. Oke. Also, the officers of the Nigeria Intelligence Agency stopped that arrest. We are not here to say who is at blame. We have been embarrassed before the international community. That two sister agencies will engage in fisticuffs, arrest and stoppage of arrests. Mr. President, this is a recipe for national disaster.”

Commenting on Mr. Melaye’s motion, Mrs. Olujimi said President Buhari had lost his authority as ‘nobody’ was in charge of the current administration.

“Right now, we have a situation whereby nobody is in charge of anything and we cannot honestly blame anyone for what is happening. The truth is that you cannot go to the house of a security agent, a man who had kept the secrets of Nigeria for so long, and just try to arrest him like chicken.

“Mr. President, there has to be someone that we can hold responsible when two brothers are fighting. The person that is supposed to be held responsible has not done anything, is not doing his work.

“This is the first time we’ll see gross irresponsibility in government whereby there is no arbiter. No one to come in between two agencies that belong to only one person. The two agencies report to one person, the presidency and now we find them fighting on the pages of the newspapers, it’s a shame. We are calling on the President, he has to sit up, he should be up and doing. Call these people to order.”

She questioned the president on why a new nominee for the position of Chairman of EFCC has not been sent to the Senate.

“Mr. President, you will remember that we rejected Mr. Magu as Chairman of EFCC and up till today nothing has been said about it. The Senate is divided. Nobody has come out to say we need to resolve the issue.

Mrs. Olujimi’s statement threw the house into a rowdy session as senators on both the ruling and opposition raised their voices to defend their own.

The Senate Leader, Ahmed Lawan, in response cautioned Mrs. Olujimi against making such statements, noting that President Buhari is in “full control of the government of the Federal Republic of Nigeria.”

“Even when Mr. President was away to attend to his health, the Acting President, Yemi Osinbajo, was in full control.

“The statement by our colleague is unacceptable. It’s not right, it is wrong,” he said amidst a roar of ‘Yes’ from senators who raised their voices in support.

“My opinion about what happened is that, could it be that EFCC did not get the right kind of document to arrest those people?

“If they did, then the security agencies are wrong. Only the investigation would reveal this.”

The senate resolved to set up an ad-hoc committee to investigate the clashes involving the SSS, EFCC, and NIA over the arrest of Messrs. Oke and Ekpeyong and to report its findings in two weeks.