An article that appeared in the UK Telegraph April 12th, written by a “Con Coughlin, the so-called “Defence editor” appears to be some form of joke.

The article was riddled with grammatical errors right from its caption which made it appear as an April fools joke days late. 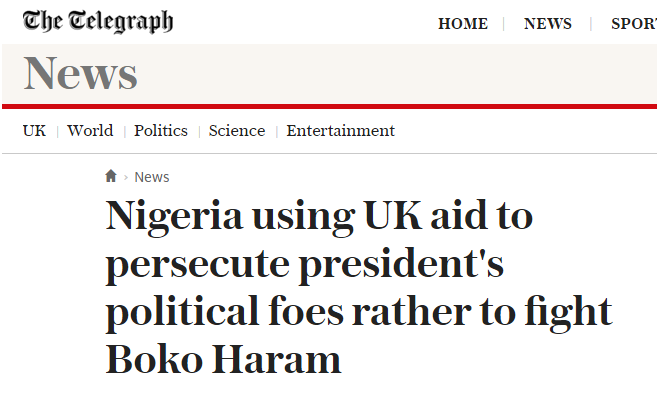 The content appeared to suggest that Boko haram was growing stronger which is also clearly inaccurate.

the article had more typos and brutal grammatical errors, one as quoted below was supposed to be the input of a “US source.”

“This is a scandal in the making,” explained a senior U.S. official. “There is no doubt the growing strength of Boko Haram is because President Buhari is far more interested in settling scores with his political opponents that concentrating his energy on defeating terrorists,”  “The result is that Nigeria is starting to look more and more like a police state while Boko Haram just goes from strength to strength.” – ERROR 2

“Human rights activists have no confirmed that around 400 women and children were abducted last year by militants from the Nigerian town of Damasak.”

We conclude the article was written by a “Wendell Simlin,” “Nkechi Odoma,” “Dr. Anthony Kolawole” type of scam artist and sent to the Telegraph to be published under the careless Defense author’s name.