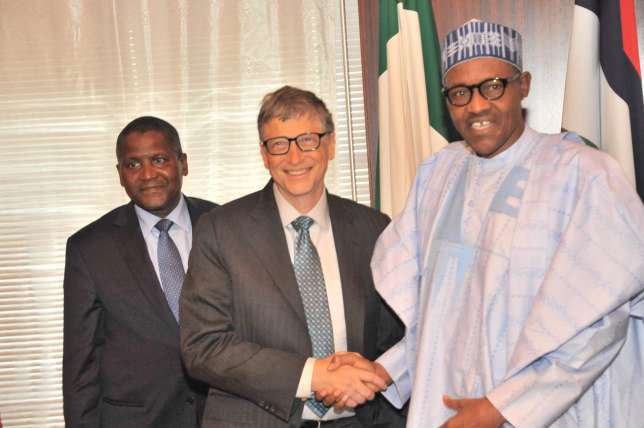 The present economic templates being used by the Muhammadu Buhari government do not have the ability to address the unique needs of Nigerians at present, American business magnate, Bill Gates, has said.

The philanthropist and founder of Microsoft corporation however said Nigeria has the ability to approach ‘upper middle-income status’ like Brazil, China and Mexico, but added that achieving this status depends on ”the choice Nigerian leaders make”.

Mr. Gates, at the special and expanded National Economic Council, held in Abuja on Thursday tasked Nigerian leaders to sincerely invest in not just infrastructural development but also human investment.

The theme of the meeting was “Role of human capital investment in supporting pro-poor and economic growth agenda”.

The investor said though Nigeria is rapidly approaching upper- middle income status, the country has ”unmatched economic potential and what becomes of that potential depends on the choice Nigerian leaders makes”.

He said the Nigerian government’s Economic Recovery and Growth Plan (ERGP) identifies “investing in our people” as one of three “strategic objectives”.

But the “execution priorities” do not fully reflect people’s needs, ”prioritising physical capital over human capital”, he said.

“To anchor the economy over the long term, investments in infrastructure and competitiveness must go hand in hand with investment in people. People without roads ports and factories can’t flourish. And roads, ports and factories without skilled workers to build and manage them can’t sustain an economy,” he said.

President Muhammadu Buhari on assumption of office had unveiled a four-year ERGP (2017-2020) to help propel the country towards the path of development and growth.

ERGP is an economic plan that builds on the 2016 Strategic Implementation Plan (SIP), a short term plan aimed at tackling corruption, improving security and rebuilding the nation’s economy.

ERGP seeks to build on the SIP by restoring growth, investing in people and build a global competitive economy.

Mr. Gates said the most important choice Nigerian leaders can make is ”to maximise the country’s greatest resource, which is the people”.

He said Nigeria will thrive when every Nigerian is able to thrive.

“If you invest in their health, education, and opportunities- the human capital we are talking about today, then they will lay the foundation for sustained prosperity. If you don’t, however, then it is very important to recognise that there will be a sharp limit on how much the country can grow,” he said.

According to author, Nigeria’s government revenue as a percentage of its GDP is by far the lowest in the world, at 6 per cent and this makes the government investment in Nigerians difficult.

“The next lowest country, Bangladesh collects 10 per cent of its GDP. If you got yourself up to second to the last in the world, you would have an extra $18 billion to budget. Obviously, you are aiming higher, but it gives you some idea about the scale we are talking about.

“We want to support you in your work to mobilise resources to invest in your country and I urge you to rethink your investment on Nigerian people,” he said.

Speaking, Nigerian billionaire business man, Aliko Dangote said for the next generation to thrive as adults and drive the economic progress, ”the government need to invest in their health and wellbeing”.

“The government need to invest in the youth’s ability to learn and apply new skills in an ever changing global economy. That at its core, is what we mean by human capital; healthy and productive and well-educated young people who are then enabled to succeed, lift up themselves and their families, and contribute to the society through their own ingenuity.
PT