Army spokesman, Col S.K Usman via a press statement yesterday claimed that Lt.Gen Tukur Buratai was never a director of procurement in Army headquarters – a statement which has turned out to be a big lie.

Quoting Col S.K Usman, he said: “General Buratai was never near either Defence Headquarters or Army Headquarters in 2013. It is pertinent to also note that he was never a Director of procurement in Army Headquarters as alleged. As a matter of fact, the Nigerian Army never had a Directorate of Procurement till when he established one last year when he became Chief of army staff.

However, a check on Lt.Gen Buratai profile on the army site shows that he was indeed director for procurement Army Headquarters, and he held the position at one time or the other during the Jonathan Presidency.

“Subsequently, he served at AHQ Dept of Army Policy and Plans, Abuja; Assistant Chief of Staff Administrative Matters, HQ Infantry Centre Jaji. Additionally, he was again at the Armed Forces Command and Staff College as Director Dept of Land Warfare from where he was appointed Commander 2 Brigade, Port Harcourt, doubling as Commander, Sector 2 JTF Operation PULO SHIELD. Upon promotion to the rank of Major General, he was appointed Commandant, Nigerian Army School of Infantry, Jaji; thereafter he was appointed Director of Procurement DHQ before being appointed Force Commander of the newly reconstituted Multinational Joint Task Force (MNJTF) under the auspices of the Lake Chad Basin Commission and Benin Republic an appointment he held till he became Chief of Army Staff. 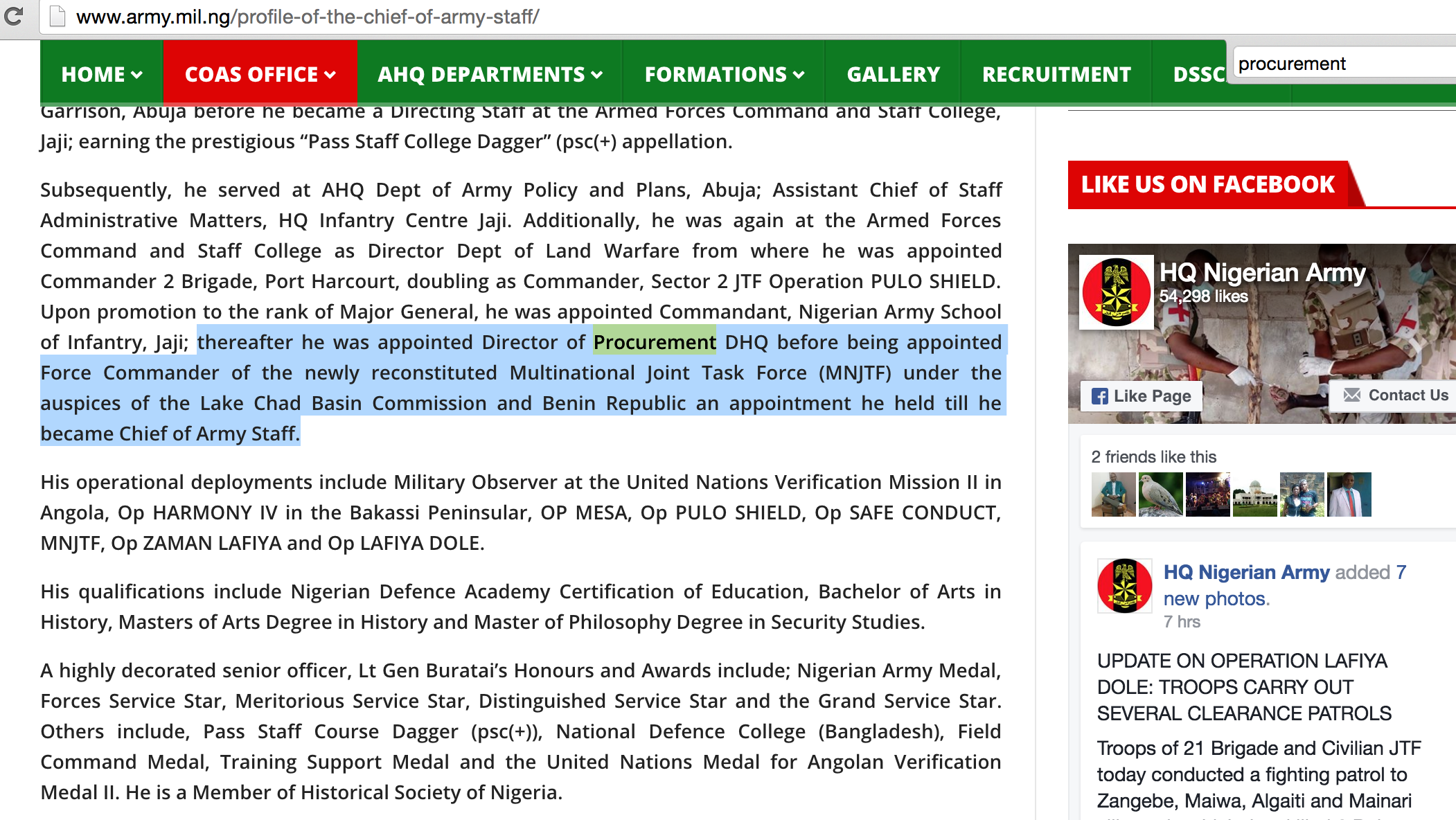 A check on the Bureau of public procurement website – http://www.bpp.gov.ng/index.php?option=com_content&view=article&id=190:bpp-facilitates-defence-headquarters-procurement-awareness-seminar&catid=83:latest-news&Itemid=238 – also reveals that Lt.Gen Buratai despite the denial has held the position of director of public procurement – also during the reign of Goodluck Jonathan.

Buratai, then a Major-General, made the following statement: “It is our hope that at the end of the Seminar we all would be better informed about Public Procurement Procedures and work towards the emergence of an enhanced Defence Procurement Procedure for the Armed Forces of Nigeria,” he stated, adding “It is further hoped that at the end of the entire exercise, participants would take away a firm grip of the difference between Public and Defence Procurement functions and procedures.”