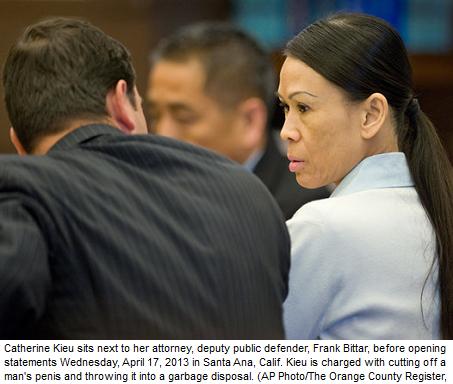 AP- SANTA ANA, California – The estranged husband of a woman charged with severing his penis said it was as though his life ended the evening of the attack.

“She murdered me that night,” said the man Wednesday on the first day of the trial of 50-year-old Catherine Kieu.

Orange County Deputy District Attorney John Christl said in his opening statement that Kieu, angry because her husband was dating a former girlfriend, laced his food with sleeping pills on July 11, 2011, then tied him to a bed, severed his penis and then put it in the garbage disposal.

“I will never have a sex life again,” said the husband, who had surgery that allows him to urinate. The penis could not be reattached. “My mental state is improving, but it may never be what it was before,” he said.

The husband said he remembered waking tied to the bed. “All of a sudden I felt a very sharp pain,” he said.

NewsRescue– This story follows another more grisly cannibal story out of Florida last month, where Priscilla Vaughn, an escort ate off the private parts of a man who had picked her up from backpage.com

After dinner at Applebees, the two went to a motel where it all happened. High on marijuana and ecstasy, Vaughn began to growl like a wilder beast as she started eating her clients private parts. Their neighbor dialed911 in fear as she heard what sounded like a beat in the room and the voice of the man calling for help.

When she was arrested, she was still growling and scoffing at the cops like a Zombie. 29 year old Priscilla Vaughn has been charged with second-degree murder.