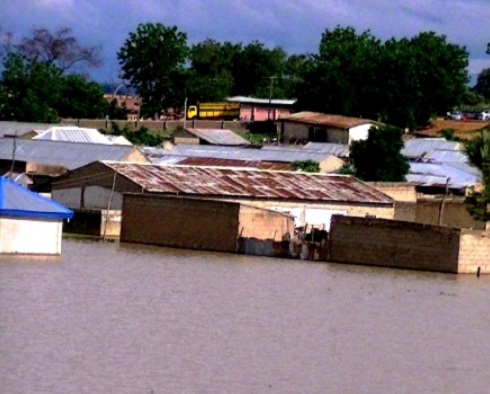 Cameroonian authorities yesterday told Daily Trust that they gave a prior warning to Nigeria before the Lagdo dam water release that caused deadly flooding in parts of Adamawa State at the weekend.

He showed Daily Trust a copy of the note verbale dated August 23 written to the Foreign Affairs Ministry in Abuja, and copied to the others, informing them of the coming flood.

The note verbale was stamped ‘received’ by the office of the head of protocol at the ministry of Foreign Affairs in Abuja on August 23.

It said, “The High Commission of the Republic of Cameroon presents its compliments to the Ministry of Foreign Affairs of the Federal Republic of Nigeria, and has the honour to intimate to the latter, the Lagdo Dam on the River Benue in Cameroon due to excessive rainfall this year has nearly reached the limit of its capacity.

“It is therefore expected that if recorded rainfall continues as it is in the next one week, the banks of the said dam will overflow, and intermitted release of its content will be done.

“In anticipation of the possible flooding of its plains and coupled with the spirit of article 111, paragraph 3, of the 5th session of the joint commission between Cameroon and Nigeria, that took place in Abuja, in November 2010, relating to the exchange of information on the activities of the Lagdo Dam and the Lake Nyos, the Cameroonian authorities are notifying the Nigerian government in order to take the necessary pre-emptive and precautionary measures, by informing the relevant Nigerian authorities within the potentially prone regions so as to avert collateral damages that may ensue from the release of water.

“The High Commission avails itself of this opportunity to renew to the ministry the assurances of its highest consideration.”

Ambassador Sinou, however, told Daily Trust that Cameroon is commiserating with the people and government of Nigeria over the deadly flooding.

When our reporter contacted the Foreign Affairs ministry for comments, the spokesman Mr. Ode Ogbole said he would have to find out first if the Cameroon letter was actually received.