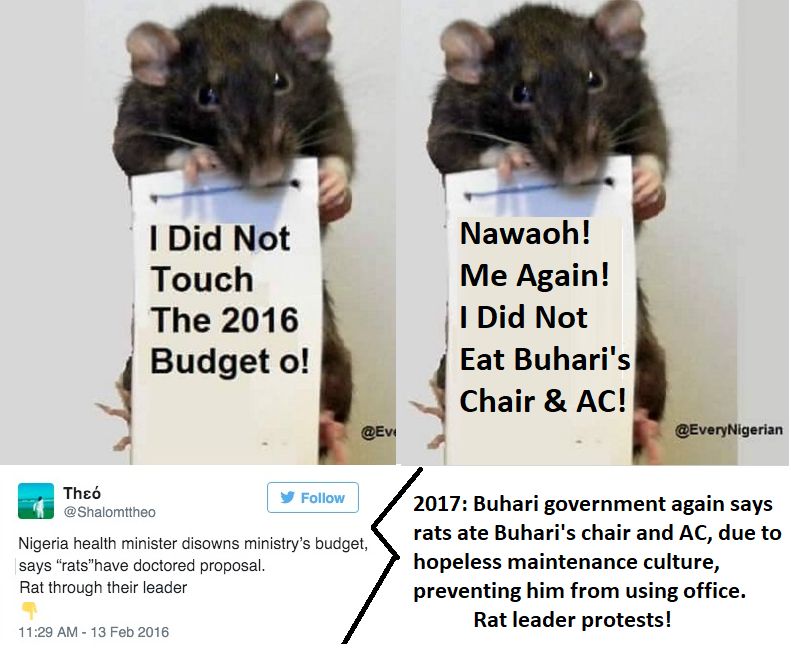 President Muhammadu Buhari upon returning from a medical tour costing tax payers millions of naira has said that his office is unusable as it was infested by rodents during his absence.

Presidential spokesman, Garba Shehu, speaking to THISDAY said: “Following the three months period of disuse, rodents have caused a lot of damage to the furniture and the air conditioning units,” he said, further explaining that it was impossible for his boss to operate from the office in that condition.

The pressing question is, how can a president who can not ensure the maintenance of his office for just 100 days of his absence, maintain more complex national assets like the nation’s refineries, ports and power infrastructure? Little surprise, fighting rats have been seen tearing through the ceiling of Murtala Muhammed International Airport.

Perhaps the most important failure of Nigerian administrations is the lack of maintenance culture. It would be understandable if the presidency said rats invaded the office and this could happen at any time and anywhere. But claiming the invasion was due to the president’s absence is a blunt admission of incompetence of the administration, which by so saying implies that systems cannot work when Buhari is away. There is no maintenance culture for Aso rock, with cleaners, pest control and the like who visit offices in the complex on schedule. This is depressing.

President Buhari did not move into Aso Rock for a full three weeks after he was sworn in. According to him, this was due to renovations being made. Quoting from PremiumTimes:

“A presidential aide had explained recently that Mr. Buhari could not move into his official residence because renovation works were still going on.”

Also disturbing is the fact that, this will not be the first time the Buhari administration has blamed rodents for administrative contusions. It is recalled that when padding was detected in the ministry of health’s budget, Buhari’s health minister blamed rats for tampering with the document.

Nigeria is sick and sadly with the dysfunctional state of the government, recovery, stabilization and progress remain a fantasy.

For Nigeria To Grow, The #CabalMustGo!