Memphisrap- In a shocking news story of cannibal attack, a naked man (a real life Hannibal Lecter) was shot and killed by police after he refused to stop his zombie-like vicious and gruesome attack eating on a man’s face. The attacker was chewing on the victim’s face tearing pieces of the man’s face off with his mouth.

Reports say the man was told to stop but kept eating on the man’s face then stood up with pieces of the man’s flesh in his mouth then growled at the police officer.

The incident was actually witnessed by cycler Larry Vega, from Miami, who says it was the most “traumatic thing” he had ever seen in his life.

Photos were captured of the naked man after police shot him, he died on the scene.

The footage shows that attacker, identified by Miami-Dade Police as Rudy Eugene, 31, walking along the sidewalk and then stopping in a shaded area created by the tramway bridge. He apparently attacks the victim, dragging him out from the shade, stripping the victim’s clothes off and then beating him as the victim kicks his legs in an apparent attempt to fight back.

The attacker then spends several minutes crouched over the victim, including when a bicyclist rolls by on the sidewalk and a white sedan rolls very slowly past the scene.

Police said at least five of those passers-by called to the report the incident, according to the Miami Herald report accompanying the video.

When a patrol car arrives, the officer appears to draw his gun quickly, but the actual shooting is blocked by the tramway overpass.

The naked man was shot several times after refusing to stop eating the man’s face so police speculate the man – who has not been identified yet – was high on some potent drug such as LSD or Methamphetamine or a combination of drugs.

The victim was rushed to the hospital with reportedly half his face eaten off, after the vicious attack.

The officer who repeatedly shot the attacker is being called ‘a hero.’ 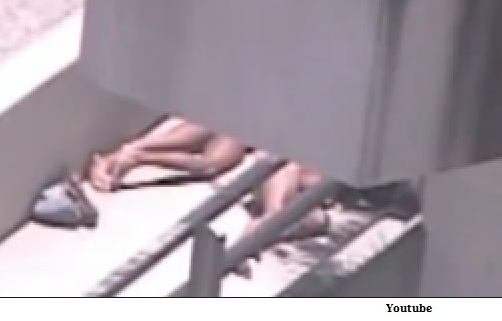