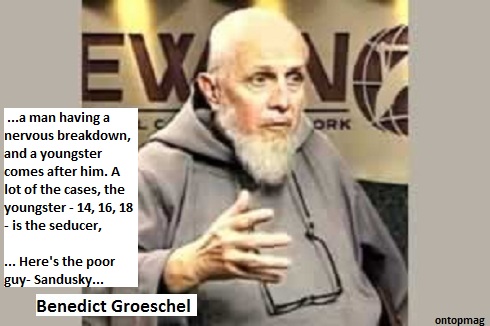 (CNN) – A prominent Catholic friar has apologized for saying that child victims of sex abuse may at times bear some of the responsibility for the attacks because they can seduce their assailants, and that first-time sex offenders should not receive jail time.

“I did not intend to blame the victim,” the Rev. Benedict Groeschel, of the Franciscan Friars of the Renewal, said Thursday. “A priest (or anyone else) who abuses a minor is always wrong and is always responsible.”

As founder of the Trinity Retreat House, which operates “to provide spiritual direction and retreats for clergy,” Groeschel has worked with priests involved in abuse.

His initial comments were published by the National Catholic Register, a conservative Christian publication, which also issued an apology.

“Child sexual abuse is never excusable,” the newspaper said in a statement. “The editors of the National Catholic Register apologize for publishing without clarification or challenge Father Benedict Groeschel’s comments that seem to suggest that the child is somehow responsible for abuse. Nothing could be further from the truth.”

Groeschel’s initial comments were published following a Register interview this week in which he was asked about those dealing with abuse.

“People have this picture in their minds of a person planning to – a psychopath. But that’s not the case. Suppose you have a man having a nervous breakdown, and a youngster comes after him. A lot of the cases, the youngster – 14, 16, 18 – is the seducer,” he said.

When asked to elaborate, Groeschel speculated that victims may be tempted to seduce authority figures in pursuit of a father figure. He then referred to Jerry Sandusky, a former Penn State assistant football coach and convicted sex offender, as a “poor guy.”

“Here’s this poor guy – Sandusky – it went on for years. Interesting: Why didn’t anyone say anything? Apparently, a number of kids knew about it and didn’t break the ice. Well, you know, until recent years, people did not register in their minds that it was a crime. It was a moral failure, scandalous; but they didn’t think of it in terms of legal things.”

Sandusky was found guilty in June of sexually abusing 10 boys over a 15-year period, some of whom he met through a youth charity.

NewsRescue- Exit Homosexuality; Enter- The Campaign To Liberate Pedophilia From the List of Sexual Disorders

June 23rd, 2012 NewsRescue- It’s basically the same argument that was used to liberate homosexuality from the list of paraphilias (sex aberration disorders). A group …

By Hayden Fox (henrymakow.com) The Penn State-Jerry Sandusky scandal may just be getting started.   Undisclosed allegations implicate Sandusky in a massive homosexual pedophile ring.  There …

Groeschel, whose answers in the interview at times seemed rambling, also said that first-time child sexual predators should not be imprisoned.

“I’m inclined to think, on their first offense, [the abusers] should not go to jail because their intention was not committing a crime,” he said.

In his apology, Groeschel said his “mind and my way of expressing myself are not as clear as they used to be.”

“I have spent my life trying to help others the best that I could,” he said. “I deeply regret any harm I have caused to anyone.”

The interview was removed from the National Catholic Register’s website and initially replaced by a note from the editor-in-chief, Jeanette R. De Melo, calling it “an editorial mistake.”

“[G]iven Father Benedict’s stellar history over many years, we released his interview without our usual screening and oversight. We have removed the story. We have sought clarification from Father Benedict.”

Groeschel is the director of the Office of Spiritual Development of the New York Archdiocese, and he co-founded the Community of the Franciscan Friars of the Renewal in 1987.

The group also apologized, saying the church leader “made comments that were inappropriate and untrue.”

“A child is never responsible for abuse,” the group said in a statement. “Any abuser of a child is always responsible, especially a priest. Sexual abuse of a minor is a terrible crime and should always be treated as such. We are sorry for any pain his comments may have caused.”

It then said that Groeschel was in a car accident seven years ago that put him in a coma for more than a month.

“In recent months his health, memory and cognitive ability have been failing,” the group said. “He has been in and out of the hospital.”

Catholic League president Bill Donohue defended Groeschel, saying his statements were taken out of context. Donohue added that Groeschel’s advanced age and the car accident have “definitely taken a toll on him.”