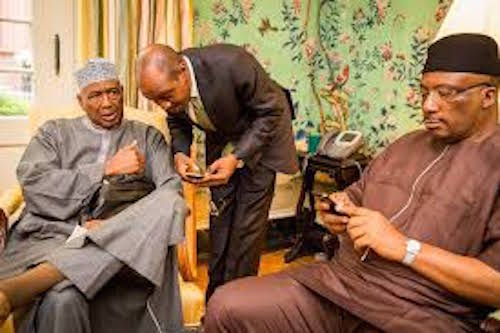 No where else in the world apart from North Korea, are such sanctions in place against the payment for goods and services overseas as has just been imposed by cabal-betrothed CBN Governor Emefiele.

Today, under the just imposed latest restriction, ordinary Nigerians (not the cabal) can no longer send any money abroad or make payments for goods and services internationally.

While big cabal-run companies receive subsidized dollars from the Apex bank, the central bank governor via a memo through banks, suddenly seized the ability of small businesses to wire money abroad without first procuring a “Form M” which is practically impossible.

Big businesses are able to get billions of dollars at subsidized rates from the CBN with a report stating how the Apex bank gives Dangote millions of subsidized dollars for his business in few months, however small business cannot buy dollars at the official rate and have to buy at black market rates.

With the new policy, the small businesses are not even yet going to be given CBN dollar rates but yet cannot wire abroad dollars they purchase from the Black market, above CBN rate and above cabal subsidized CBN rates.

For big businesses, they receive millions in subsidized dollars with just a phone call. But now small businesses are crippled to death.

Consequent to this, there is a shortage of dollars in the market as the black market sellers are hoarding their dollars watching what the impact of the North Korea-like sudden crippling sanctions on the rights of Nigerians to purchase abroad will be. The latest in illegal policies that Emefiele has imposed to rob the poor and feed Nigeria’s super-wealthy.

Small businesses are entering irreversible damage as they are unable to procure new material and make payments to vendors abroad for services, items or logistics transactions.

There is chaos in the banking sector. And with Buhari absent from running the affairs of the country and every one being their own boss, the cabal-drunk CBN Governor Emefiele may not be held to account and forced to reverse this illegal policy only seen in North Korea, before the damage destroys Nigeria.

The Buhari administration has recklessly ruined the Nigerian economy, allowing the most massive amount of brazen corruption in history with double subsidy on petroleum. the retained and expanded duel subsidy and an additional secret FOREX subsidy on the same product by the CBN which gives the cabal billions in Foreign revenue to funnel into the pockets of the CBN governor, politicians and other ruling cabal including the 3 men at the presidency.

Attorney Falana requested freedom of Information release of information on this secret FOREX subsidy being granted to cabal oil importers, but the Buhari government and CBN refused to oblige the orders of the court.

The Buhari government has been so corrupt it reclaims looted money looted by former president Abacha only to give it back the the launderers he used. As has been exposed in the case of Kebbi state governor Bagudu. Due to such gravid corruption, with billions thrown to all politicians and assembly men for frivolous projects lime “Assembly renovation,” Nigeria’s economy has been wrecked, the foreign reserves depleted and rather than sanction the wealthy cabal beneficiaries, the CBN has imposed sanctions on Nigeria’s largest employers, small businesses, in a move guaranteed to cripple the economy and lead to massive riots.

#EmptyTreasury: Forget The Excuses Buhari With His Emefiele Have Finally Totally Collapsed The Nigerian Economy

Small businesses affected by this draconian policy are responsible for the employment of 75% of Nigerians.