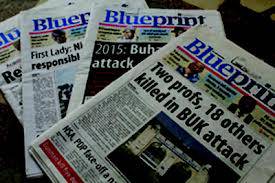 Blueprint Newspaper’s Board of Directors returned the N9 million the organization received from former President Goodluck Jonathan. The funds were intended to be compensation for copies of the newspaper seized by security agents in 2014.

A SaharaReporters correspondent confirmed this development from a source at the Blueprint’s newsroom earlier today.

The decision to return the money was announced by the newspaper’s Executive Director Salisu Umar.

In 2014, Jonathan Administration funneled N120 million, through the Office of the National Security Adviser (ONSA), to the Newspapers Proprietors Association of Nigeria (NPAN).  The payments were allegedly made in compensation for the seizure of the newspapers by security agencies.

The money was allegedly taken from the $2.1 billion which was intended to finance the war against Boko Haram.  Instead, these funds were given to various individuals and organizations to help President Jonathan’s 2015 re-election bid by former National Security Adviser Sambo Dasuki.

Several other newspapers that received money from the ONSA have already sent the money back.

Mr. Umar confirmed the payment by noting a a Guarantee Trust Bank Draft which indicated that N9 million had been paid back.

The full statement regarding the repayment can be found below.

“The infraction on the rights of some newspapers by some agents of the Federal Government was widely reported in 2014. Specifically, the said agents seized numerous copies of the affected newspapers, including Blueprint.

“And in line with the dictates of the rule of law, the Newspapers Proprietors Association of Nigeria (NPAN) and the affected members chose to head to court for redress.

“In its wisdom however, the Federal Government led by the then President Goodluck Jonathan, after a peace parley with the NPAN leadership, agreed to an out-of-court settlement, consequent upon which the affected media organisations , including Blueprint Newspaper, got N9 million each.

“This decision, to any reasonable mind is very much in order as it simply demonstrated that the Federal Government rightfully admitted its wrongdoing.

“However, in view of the unfolding development surrounding the arms deal investigation, which supposedly revealed that the restitution was paid from fund set aside for arms deal, the Board of Directors, has refunded same (N9 million) via a GTB bank draft No 04378726, drawn in NPAN’s name, dated February 1, 2016, and forwarded to NPAN Secretariat. In the least, this will certainly put to rest some misgivings that have been on over the compensation paid to media owners

“May we also add here that more than any other thing, the board considers this a great sacrifice if that would only uphold the integrity of the media as a member of the Fourth Estate of the Realm and the true watchdog of the society.

“Finally, we shall continue to abide by NPAN’s decision on this and any other matter bordering on its members’ interest.”