Among associates of former National Security Adviser, Sambo Dasuki arrested in connection with the alleged looting of as much as 5billion dollars cash extorted under guise of fighting Boko Haram is a certain Alhaji Aminu Baba Kusa, who is a member of the National intelligence Agency (NIA) and the chairman of An-Nur Mosque, Abuja.

He was arrested along with his son, Mohammed Baba-Kusa, a former NNPC General Executive Director. Both are being probed on charges ranging from criminal conspiracy, theft, forgery, the diversion of public funds, to money laundering as the Nigerian government continues to clamp down on Nigerians who used Boko Haram as a means to loot the nation’s billions under the Jonathan administration.

Aminu Baba Kusa aka, ABK has long been accused of fraudulent dealings in the NNPC.

According to Elendu, “Baba Kusa ensured free flow of crude oil supplies to Vitoil contrary to the joint venture agreement. Even against established rules, he was said to always insist on serving Vitoil interests first before that of NNPC. Of course, a lot of perks came his way from Vitoil as his children attend some of the best schools in United Kingdom and Europe courtesy of Vitoil.”

Baba Kusa has been recognized for his illegal dealings for long. Since 2003 he was noted for shady deals involving Sahara energy and was protected then by Obaseki. 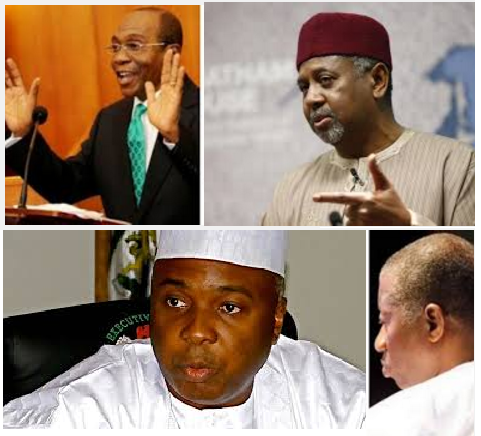 Dasuki withdrew as much as $600 million dollars from the Godwin Emefiele-led Central bank in the space of just four weeks prior to the elections under approval of Goodluck Ebele Jonathan, and millions more totaling billions of dollars over the years on pretext of arming the military.

One Abba M.T. Usman has also been arrested, he was allegedly paid to supply six helicopters and some ammunition, but none was supplied.

Others including AIT’s Raymond Dokpesi, former minister Bashir Yuguda and former Sokoto Governor Bafarawa were arrested. Dokpesi and Sokoto’s Bafarawa were arrested for allegedly receiving N2.1 and N4.6 billion respectively from the CBN Boko Haram funds dole-outs. Yuguda in his case reportedly got about N3 billion.

The administration was emptying Nigeria’s coffers ahead of the elections and various known launderers were employed to smuggle hard currency out of Nigeria. As much as 5 billion dollars was looted over he Boko Harm years in this way as the terror provided a cool opportunity to milk the nation humongous defense budget of about 18 billion dollars over the 4 Jonathan-Boko Haram years.

The Reason For Depreciating Naira

The continued crash in Nigeria’s dollar on the forex market has been directly related to the billions the Jonathan administration pulled out form the Central bank in unprecedented fashion.