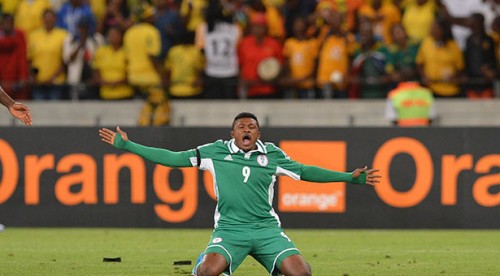 Morocco scored three goals in the first half.

Nigeria’s home based Super Eagles have qualified for the semi-final of the African Nations Championship, CHAN, after a 4-3 victory over Morocco.

A shambolic first half performance by the home based Eagles could have seen the team crash out of the competition being played in South Africa. However, the Coach Stephen Keshi tutored side played the game of their life to upturn a 3-0 deficit suffered in the first half.

The North Africans netted three goals inside seven minutes in the first half as they led the Eagles.

Moutouali got a brace for the Atlas Lions, scoring in the 33rd and 40th minute; while Lajour was on target in the 37th minute.

While many felt it was all over, the Eagles through Ugona Uzochukwu began what turned out to be a memorable comeback as he scored four minutes into the second half before Rabiu Ali reduced the deficit, scoring in the 56th minute.

Nigerian fans had their hearts till the 90th minute when Ejike Uzoenyi completed the comeback with a well taken strike.

Incidentally the Eagles could have wrapped up the game afterwards but Barnabas Imenger’s effort was inches over the bar, a situation that saw the thrilling quarter final duel stretch into extra time of 15minutes in each of two halves.

Nigeria started the better side in the extra time period but again failed to convert the early chances created.

The Eagles waited till the 111th minute before Aliyu Ibrahim scored what proved to be the winner and send Nigeria into the semi final. Nigeria has now scored 12 goals in the competition so far, the highest by any team.

The seven goals scored in the match is also the highest in any single match in the history of CHAN.

Read our live updates of the math below:
Update 1: 4:11pm
A scanty stadium here in Capetown but the Nigeria supporters club remain the loudest of the two countries cheering their teams.

Update 5: 4:32pm
Moroccan fans bark at referee over a perceived wrong call of a push on Salami.

Update 14: 4:50pm
FIRST HALF STATS
Nigeria had no shot on target in the first half, Morocco had three.

Nigeria had 6 shots at goal, Morocco had 8.

Update 15: 4:56pm
Morocco scored 3 goals in 7 minutes to lead Nigeria 3-0 at end of 1st half. The winner of the match proceeds to the semi-final of the competition. Update 17: 5:03pm
Nigeria is yet to make a substitution in the game. 48 minutes played.

Update 25: 5:25pm
Karroucchy gets a yellow card for a foul on a Nigerian player.

Update 26: 5:27pm
Nigeria’s Kunle Odunlami gets a yellow card for a foul on a Moroccan player.

Update 32: 5:45pm
A Moroccan player gets a yellow card for rough tackle.

Update 36: 5:52pm
30 minutes of extra time will be played. Should there still be no winner, the match will go to penalties.

Update 37: 5:54pm
While we await the commencement of extra-time, you should know that Nigeria has now scored 11 goals in CHAN2014; the highest so far in the competition.
Morocco scored all her 3 goals in the first half, Nigeria scored hers in the second half.

Update 50: 6:40pm
Despite going three goals down in the first half, Nigeria defeats Morocco 4-3 after extra time.

Nigeria’s Ejike is Orange Man of the Match.