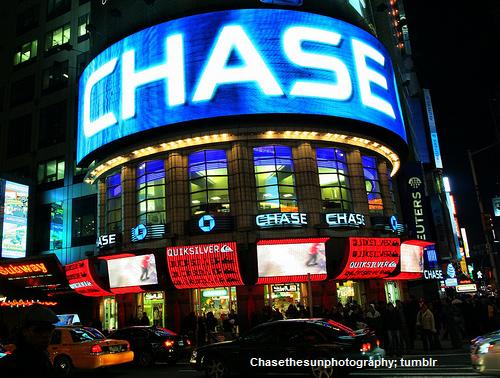 NewsRescue– As big corp. become more and more powerful and dominating, the extent of the exertion of their powers over the masses enters new territory every passing day.

The banking industry has recently engaged in what can be equated to “Shariah banking,” standards in the United States.

According to a CNBC article on May 17th, JPMorgan Chase bank and Citi National bank declined to offer services to clients simply based on their subjective feelings about the “morality” of their clients.

Preston recently opened a business account with City National Bank in Los Angeles. When she went to deposit checks into the account days later, however, she was told it had been shut down, due to “compliance issues”.

She found the manager she had originally worked with and asked what had happened. The bank, she was told, was worried about the Webcam shows she had on her site and had revoked the account.

And this case from JPMorgan Chase, also in the CNBC report:

And these are only two of thousands of cases nationwide with banks shutting down customers accounts or depriving them of service for usually unspecified and never revealed “compliance reasons.” Numerous cases can be found here: ComplaintsBoard

The banks claim this is simply a relationship, with both parties free to terminate whenever they wish, but do they really have such rights to close accounts based on race, ethnicity, religion or moral affiliations as is now common trend? And what is the safety and security for the US banker, when he or she is unable to have a bank account because the almighty banks “decide,” they do not like certain things about him, in a world of electronic transactions?

Blacks and other minorities, and Africans, especially Nigerians have been most hard hit by these non-specific closures based on banks like JPMorgan simply “not liking things” about the clients. Be black, be Nigerian and have the bank have the slightest suspicions about your success, and you are prone to be declined service.

Class actions have been considered as can be seen in the fora, but as with all cases of big corp. domination, the victims of such disenfranchisement are typically not powerful enough to battle the corporate monsters. Lawyers tell victims, “there is a conflict of interest,” so we can not take up your case. Well of course, the lawyer has a Chase bank card or Capitalone bank card in his pocket, so how and why will he go against “his bank.”

Moral discrimination in banking is one of the underlining features of Shariah Islamic banking, where banks refuse to do business with vendors of banned substances, like alcohol for instance, or with prostitutes. But the Shariah banks are much more reasonable and honest, in the sense that they tell their customers their operating guidelines from the jump. The same can not be said of the FDIC insured US banks.

Interestingly, taxpayers subsidize these big banks with $83 billion a year. No surprise, these financial institutions spend billions each year in support of election campaigns and lobbying, to maintain these subsidies. According to this report, the top 5 US banks, JPMorgan, Bank of America Corp., Citigroup Inc., Wells Fargo & Co. and Goldman Sachs Group Inc., receive 64 billion USD out of the taxpayer $83 billion subsidy.

There is no protection for the masses from “big business.” Apparently with no expected victory of the increasingly oppressed victims of these banks, and a government hooked on financial industry donations, we see this as just another successful maneuver to send the masses into the pits of social and societal decay,  increasing the gap between the 1% and the 99.