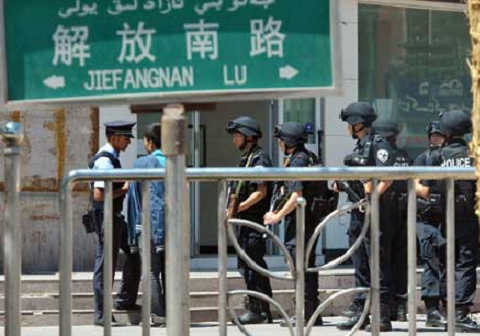 Chinese authorities in the northwestern province of Xinjiang have banned Muslim officials and students from fasting during the month of Ramadan, prompting an exiled rights group to warn of new violence.

Xinjiang is home to about nine million Uighurs, largely a Muslim ethnic minority, many of whom accuse China’s leaders of religious and political persecution.

The region has been rocked by repeated outbreaks of ethnic violence, but China denies claims of repression and relies on tens of thousands of Uighur officials to help it govern the province.

A statement from Zonglang township in Xinjiang’s Kashgar district said that “the county committee has issued comprehensive policies on maintaining social stability during the Ramadan period.

“It is forbidden for Communist Party cadres, civil officials (including those who have retired) and students to participate in Ramadan religious activities.”

The statement, posted on the Xinjiang government website, urged party leaders to bring “gifts” of food to local village leaders to ensure that they were eating during Ramadan.

Similar orders on curbing Ramadan activities were posted on other local government websites, with the educational bureau of Wensu county urging schools to ensure that students do not enter mosques during Ramadan.

During Ramadan, Muslims fast from dawn to dusk and strive to be more closer to God, pious and charitable.

An exiled rights group, the World Uyghur Congress, warned the policy would force “the Uighur people to resist [Chinese rule] even further.”

“By banning fasting during Ramadan, China is using administrative methods to force the Uighur people to eat in an effort to break the fasting,” said group spokesman Dilshat Rexit in a statement.

Xinjiang saw its worst ethnic violence in recent times in July, 2009, when Uighurs attacked members of the nation’s dominant Han ethnic group in the city of Urumqi, sparking clashes in which 200 people from both sides died, according to the government.