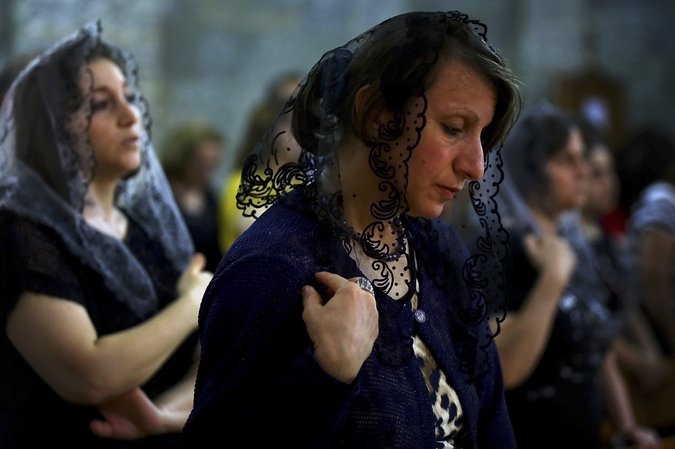 The Middle East has been the heart of the world throughout history as it still is today. Prophets received the revelation of God in these holy lands. God manifested Himself to the Prophet Moses (pbuh) on Mount Sinai (Mount at-Tur). The Prophet Abraham (pbuh) lived in the land of Canaan. The Prophet Jesus (pbuh) and his disciples communicated the Gospel to the people in the Middle East for the first time. Like Judaism and Islam, Christianity is a religion that began in the Middle East. The Prophet Jesus (pbuh) was born in Bethlehem, south of Jerusalem. The first Christians settled in today’s Syria and constituted the majority of the population in a considerable part of the Middle East for nearly 600 years until the birth of the religion of Islam. Although the Christian population in the Middle East is today very small, in 722 A.D., Christians constituted 3.8 million of the 4 million people who lived in the lands of today’s Syria.  Provinces such as Jerusalem, Damascus, Aleppo, Mardin, Beirut, Istanbul, and Baghdad were the historical centers of Christianity.

The major transformation that appeared in the Middle East with the Arab Spring had a direct influence on the lives of Christians in the region as well. Radicals who are deeply opposed to modernism, globalization and multiculturalism and who cannot tolerate those not from their own religion- as a matter of fact, they cannot even tolerate those not from their own sect- have adopted an aggressive and exclusionist attitude against Christians for years. Many of them were forced to migrate; their churches were demolished, their houses were destroyed and burnt down because of such an attitude against them. For that reason, many Christians had to hide their Christian identity.

The Christian minority in the Middle East still does not enjoy religious freedom in real terms today, and they are deprived of their rights to communicate and proselytize their religion. For instance, there is not even a single church in Saudi Arabia. The country does not provide education for Christian people to become clergyman; the use of Christian symbols is not permitted and religious clothing is banned while entering to the country. Saudi Christians are only permitted to perform their acts of worship in their homes. Though Egypt has a large population of Christians compared to other countries, there is a great deal of pressure put on them as well.

The case of this pressure on Christians dates back to earlier times in Iraq. Upon the collapse of the Saddam regime, 300,000 Christians had to leave Iraq. The Iraq War, which originally broke out as an intervention against a dictatorship, then turned into a total disaster.  Differences that derived from ethnicity, sect and religion were incited and this sedition still continues to claim lives in Iraq. Beyond question, Christians were affected by this situation as well, and the number of Christians in the country decreased by two-thirds upon the invasion of Iraq by the United States of America in 2003.

Although those who have brought about this situation claim that they have done that in the name of Islam, the oppression that our Christian brothers and sisters suffer from has no place in Islam. Islam is a religion which literally means a call for peace and safety. It is a religion of love that preaches people to embrace not only those who are like themselves but also those who are not and to act conscientiously. Therefore, it is a major and critical fallacy to claim that Islam is the reason for the hostile approach to Christians in the Middle East, which has become alarmingly widespread in recent years. On the contrary, the abandonment of true Islamic values has resulted in such an outrage against Christians. The basis for this unfounded belief leading to extremism is not the Qur’an, which is the source of Islam, but superstitions and fabricated hadiths that do not comply with the Qur’an. That is why the only possible way to eliminate this artificial quasi-religion of bigotry and extremism is through the Qur’an. Our Prophet (saas) married Christian women, dined at their homes, visited their sick and treated them with kindness. When the Najran Christians visited him, he spread out his robe for them and told them to sit upon it. Our Prophet, knowing that the earliest Muslims would be safe and secure there, ordered them to migrate to a Christian country, namely Ethiopia. Indeed, Negus, the King of Ethiopia, warmly welcomed these Muslims and ensured that they lived safely in his country. Our Prophet led a funeral prayer in absentia in Madina for King Negus when he passed away.

Christians are religious people who love God and who are deeply devoted to the Prophet Jesus (pbuh). That is why showing the deepest affection and compassion to Christians is a requisite; and oppressing them is impermissible. Some bigoted people perpetually fuel anti-Christianity, carry out hateful propaganda against them and claim that they do all of this in the name of religion whereas such behavior strictly contradicts the morality of the Qur’an. It is a grave oppression to prevent Christians from practicing their religion freely, to compel them to refrain from expressing their Christian identity, to make fun of them, to demonstrate a lack of respect for their sacred values, to force them to migrate, or to beat and murder them. The necessary thing to do in order to put an end to the oppression against Christians is to ensure that all Muslims act in accordance to the Qur’an, which is the Word of God, and adhere to the practices of our Prophet (saas).