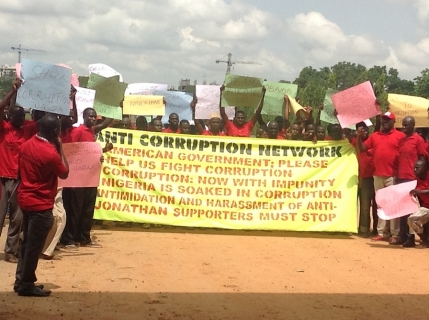 NewsRescue- There are reports of what appears to he spontaneous protests and unrest in Central Business District, Abuja, the capital of Nigeria.

People could be seen on the streets shouting that “no more President Jonathan in 2015.”

We are yet to understand how these apparently spontaneous riots and civil disobedience broke out, but they might not be unrelated to the state of insecurity and corruption in the nation which recently culminated in a declaration of a state of emergency in the northern states.

Anti-Corruption Network Protest At The US Embassy Asking For Visa Ban On Jonathan Ministers Diezani, Adoke, And Orubebe The Anti-Corruption Network (ACN) today escalated the war over the non-war against corruption in Nigeria by sending a petition to United States President Barack Obama, citing the dangers of failing to check “corruption with impunity” in the country, and linking it with growing insecurity.

The group led by a former house of representatives member Dino Melaye led protesters to the US Embassy in Abuja to drop a letter demanding that President Obama revoke the visas of key officials of President Goodluck Jonathan’s regime and their families.

“We are deeply concerned that if this gravity of corrupt practices goes on unchecked, unpunished and unabated, it will definitely worsen the unpalatable security situation and challenges we are already facing which its root course could also be traceable to destructive impact of corruption,” the group said in the letter, dated May 16 and routed through the US Ambassador in Nigeria. -SaharaReporters

NewsRescue- Leading the protest was the very vocal critic of the Nigerian government, Dino Malaye, who had a recent  attempt on his life, last April, when his bullet proof windows saved him as unknown assassins released rounds on his car.