NewsRescue- It happened not too long ago. They held a meeting in Belgium at the invite of the very evil King Leopold II. The theme was- to colonize the dark Africa continent and ‘civilize’ them, because them ‘barbarians’ were not civilized.

This history of imperialism is all too clear, and decades of pillaging of a continent including the largest deportation of humans in history, over 300 million, during the trans Atlantic slave trade, the massacre of entire countries in genocides and holocausts like the one of the same King Leopold of Belgium, where he cut the hands and killed over 25 million of 30 million Congolese while he exploited the Nation to build today’s Belgium, followed.

To achieve this goal, Leopold created the International African Association (IAA) in 1876, at a conference of famous explorers in Brussels. As its first secretary, King Leopold opened the conference thus: “To open to civilization the only part of our globe which it has not yet penetrated, to pierce the darkness which hangs over entire peoples, is, I dare say, a crusade worthy of this century of progress….”

These words, eerily similar to those we hear today, about “giving ‘freedom’ to free people”, and “achieving some outstanding crusades of a so-called proliferation of democracy to the undemocratic dark axis”.

See: The Jewish Holocaust was precedented and superseded by Leopold’s 30M Holocaust of Africa’s Congo

The impacts of this perilous western colonization of Africa lingers on, as the Congolese for instance are still engaged in tribal feuds and still cut each-others hands just as they were taught to by the wicked colonialists. Africa has known disarray as a direct consequence of the exploitation quest and has been unable to return to its prior glamor.

But the reality makes the case worse. The premise for the invasion of Africa, was the civilization of barbarians. In truth, the ‘barbarians’ of Africa were very civilized. Many Africans could read and write when the westerner came and even had printing press’. So what did they do when they found this? They burned schools and libraries, stole books and material and banished and exiled kings of literature to protect their justification for the colonization of the continent.

The excerpts below and images of the many written languages of Africa attempt to give a little picture of the painful truth.

In the beginning of the 20th century or perhaps earlier, the people of Cameroon were able to accomplish

one of the most remarkable African achievements of the century: the invention of a self-sustaining and selfgoverning writing system and a printing device to document the histories of the people. Sultan Ibrahim Njoya, whose father was killed resisting the German invaders, led the invention. The invention that started in the late nineteenth century (I 895 or 1896) was completed by the beginning of the 20′ century in 1903. By the time of the Germans arrival, the writing system was in use in conjunction with the Bamum language, which is a tonal language, which means the meanings of a word will vary depending upon the tone with which the sound of the word is uttered. The system went through seven stages of development. The first stage had over five hundred pictographs and the last stage has had only 35 syllographs, graphs designed to represent all the phonetic and tone sounds in the Bamum language of the Shumom people.

King Njoya opened a school in Fumban where many are trained to become literate and promote leaming in their own language. Several manuscripts and documents were produced, including the histories, laws and customs of the people and their neighbors. Two systems of writing were taught at the school: the Royal and the popular scripts. Tragically the most important documents are taken away by colonial masters out of Cameroon and they are housed in the French and British Museums. The Germans and later the French did not want to see the flourishing of a literary tradition among the Bamums. Not only did they kill or exile their leaders; they also violently banned the use of Shumom, thereby condemning the people to colonial dark age.

King Njoya’s magnum opus in the royal script ran to 1,100 pages and its replica is now with the Pitt-Rivers Museum of Oxford. The published text regarding the writing system was the combined works of MDW Jeffreys and Madam Dugast of France in 1950 under the title: L’Ecriture des Bamum and it was published in France. [African Writing Systems]

It is noteworthy to point out that while the so-called barbarian Africans created over 10 unique alphabet writing systems, no known alphabet was ever invented by Europeans. 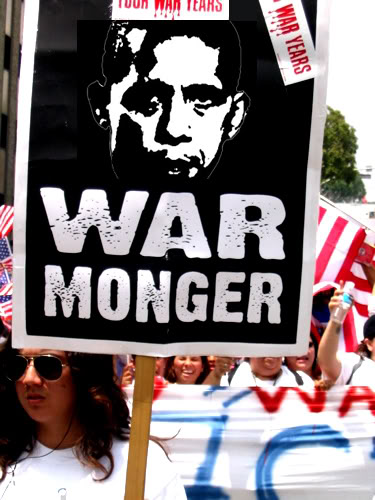 Is this happening again right before our eyes? Are we Africans and others folding our arms again and watching a replay of a similar falsity premised colonization of the Middle East? Also for exploitation and resource?

It is 11 years after, Afghanistan remains heavily colonized in an acclaimed search for an Osama? Osama? Osa.. who? …that has not been found for 11 years, while the oil pipeline is built beneath the Nation?

It’s 7 years later, what was that about Nuclear weapons in Iraq? Iraq is still colonized and the oil deals are going on smoothly. Was that Collin Powell at the United Nations talking all that ‘aiding the elusive Osama…Osa who?’ talk and Iraq having WMD’s, apart from the WMD’s US assisted them with to battle Iran [ad#medium]in the Iraq-Iran war…and all that talk about Uranium from Niger in Africa and stuff? It’s 7 years later, no WMD’s in Iraq and an ongoing occupation. For every 10,000 troops Obama pulls out, he replaces them with 30,000 mercenaries and private contractors, they say.

We don’t have to ask whether you will sit down and watch this same drama play over once more, because we know you will. We all will sit and watch as the Middle East is Africanized. Destroyed eternally as was Africa by the rampage of colonization and the tribal feuds and destruction of self image that is the known gift of wicked colonization.

Popcorn while we watch?