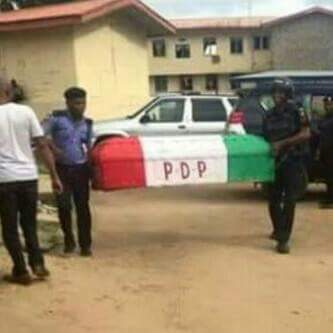 By the time you read this, another twist would have been added to the drama involving the almost certain and total collapse of the Peoples Democratic Party (PDP). This fast-moving melodrama will continue to engage public attention for quite a while, and in the tradition of the PDP, it will involve twists and turns that are powered exclusively by the interests of its members who have occupied its highest offices or key political positions in the nation. If there are members of the party who would not have not received category ‘A’ invitations to state functions between 1999 to 2015, they will just have to hope that there are fragments of the party they can still hold on to by June this year.

The emergence of Ali Modu Sheriff as national chairman of the party is captured in the Hausa adage involving a mad woman who goes to collect firewood. She will labour to make a bundle much too big for her to lift and carry home. Every time she fails to lift it to her head, she will untie and add more pieces of wood to the bundle. She will then try to lift the now heavier bundle. Contrary thought could see Sheriff’s appointment as an audacious move by a remnant of a local party on the run to rally the troops and organize a fight back. Those who will see it this way will need to redefine audacity to include the idea of a soldier who shoots himself in both feet, hoping the enemy will fear him for his seeming courage.

The more sophisticated elements of the party still holding on to their membership cards may be tempted to think Sheriff’s emergence at the head of a party he helped destroy is a good example of thinking outside the box. This will make sense in circles where the box has no defined space or value, and thinking around it is limited to very few with an identifiable record of interpreting the PDP’s tailspin to ignominy. There could be a few others who will insist that Sheriff is product of a party tradition which routinely abandons merit, integrity, propriety or justice the moment money, power and influence show their faces. In a context where few PDP chieftains from the Northeast today will step out into the limelight being beamed all over by the E.F.C.C, Sheriff’s bravado will disappoint those elements in the party who believe that it’s descent can be arrested.

The frenzy of activities following the emergence of Sheriff as chairman of PDP should remind Nigerians that huge segments of the nation’s political elite are still holed up in a structure that has been sinking in the last three years. A zoning policy that has been its undoing owing to the failure of its powerful people to rein in their ambitions has been trusted to produce a leader for the party that could not have been foreseen by the most gifted of seers. From a region with an army of members who had wielded enormous powers, you would safely have won a bet if you had mentioned ten former governors, chairmen, ministers, legislators and any one of the many who grew fat on the party’s patronage to emerge in place of Sheriff. With muscle from the only two PDP governors in the entire north, former President Jonathan and governors from the PDP strongholds of the Southeast and South-South, Sheriff now finds himself at the head of a party that has shrunk from Post Traumatic Defeat Disorder and odious revelations of its stewardship. The exodus from the party in the north will now assume dimensions of a stampede, and a few loyalists may hide their passion for the party from relations and friends.

It is arguable if Sheriff will be able to lead the PDP in the ordinary sense of the word. Organs of the party will overwhelmingly reject him or split around him. Previously-powerful members of the party who were governors, ministers or legislators will shake his chair until he falls off, or they bring the entire roof down. When you see people like Femi Fani-Kayode holding their noses in Sheriff’s presence, you know you have reached the bottom in the search for noxious infamy. Yet, on merit alone, no two souls deserve each other’s intimate company more than these two. If Jonathan’s ministers can take a break from lamenting the tightening noose of the E.F.C.C to denounce Sheriff and work to unseat him, it is obvious that his projected three months in the chair are unlikely to be of any value to the party.

Less-informed observers may wonder what makes Sheriff so attractive to hostility from many of the powerful members of his party. They may find answers from those who put some store in political fidelity. Along with Attahiru Bafarawa, this is a politician who has made the full rounds of the political terrain, so much so that you will be forgiven for assuming that they wake up every morning asking which is their current political party.  What do you call a man who is comfortable marrying a woman that has been married four or five times to different men, some of them twice?

There  will be people who will say a former two-term governor and three times senator facing charges by the E.F.C.C; one whose relationship with the roots, growth and development of Boko Haram is still a matter of intense interest; one who enjoyed and still enjoys intimate relationship with President Jonathan(who himself is walking free owing only to the slippery covers of political goodwill); and a politician whose last outing in his home state was a humiliating defeat in a contest to return to the senate, is not suited to lead the PDP even for one week. These will be people who are largely untutored in the history and philosophy of the PDP. Sheriff’s emergence aptly captures the logical development and decline of the PDP, and those that will fight him will benefit only from discovering that the party may not be worth fighting for.

Barring a miracle and a disastrous failure of the All Progressives Party (APC) to hold together and lead effectively, the PDP as a party is all but practically finished. It will leave a vacuum that could negatively affect the political process. Without the PDP or another party to provide a credible opposition to the APC, the latter will resemble the lone prizefighter in the ring who has to keep punching himself to test his strength and endurance. He will not know how he will fare against a real opposition. The APC has much to learn from the current misfortunes of the PDP. It will also benefit from informed vigilance over PDP’s live parts in the national assembly and within the APC itself.