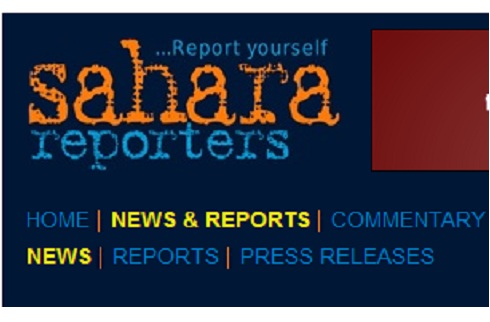 The article which was shabbily written, described an alleged terror attack on Christian corpers in Taraba state, claiming that ‘hundreds of thousands of dollars’ was stolen from them in a robbery, as reported by ‘the victims’.

The story is below:

Recently these corpers were rescued from kidnappers
By SaharaReporters, New York

The bandits who stormed the Family House of the Redeemed Christian Corpers Fellowship (RCCF) held the parishoners hostage for hours after relieving them of  hundreds of thousands of dollars and other valuables.

The gunmen  gained entrance into the Corpers lodge from a toilet in the female wing of the building. They carted off three laptops, about 24 mobile phones and thousands of naira.

“We were about 20 corpers in the lodge when it happened,” recalled a church member. All our phones were taken away, some of us had two, three phones. Our monthly feeding allowance which we contributed to was also taken away by the evil men.”

A fellowship member who asked that his name not be used in print said: “We were sleeping when some men came in holding all sort of dangerous weapons but we never resisted them, we obeyed their orders because we were in great fear. They asked us our state of origin and religion and threatened to behead us if we misbehaved. ”

RCCF  president Banji Omogbehin said “the bandits were asking us for our state of origin, threatening to rape our ladies and behead us.” A motive for the attack is unknown. See story: http://saharareporters.com/news-page/christian-corpers-lodge-suffers-early-morning-attack-jalingo-taraba-state

Some of those comments are below:

I WANT TO BE CLEAR…..
CHRISTAIN CORPERS LODGE…WHY?
HUNDRED THOUSANDS OF DOLLARS…..FROM WHERE?
IS THE SON OF OR DAUGHTER OF DIEZENE ALLISON MADUEKE AMONG THEM?
HOW MUCH IS THIER INDIVIDUAL ALLOWANCES AND IN WHAT CURRENCY ARE THEY PAID?
IS THIS NOT AN INSIDER JOB?ASKING THE CORPERS THESE QUESTIONS TO MAKE IT LOOK RELIGIOUS & ETHNICIST?
SAHARA REPORTERS, THIS IS NOT GOOD ENOUGH STORY AT THIS TIME!
GO FIND SOMETHING ELSE!

i lived on same street with cristian corpers lodge in jalingo and there is nothing like that , i wonder where this news is coming from.

These corpers should be arrested for money laundering. They are not different from Ibori. Ibori stole from the public, this corpers probably stole from the church.

Ur report on Robbery on Christian Corpers is a disgrace to journalism practice in Africa, Nigeria in particular. It makes me think the story is cooked up to evoke sentiment or to create hatred among us peace loving Nigerians. Shame on u. This report must have come from the Sahara desert not Taraba

This is very funny indeed. Corpers with hundred thousands of dollars? If this is true, the corpers themselves should be part of the suspect robbers. If Nigeria is a normal nation, even a minister to own that much should be seriously investigated.

The Sahara Reporter report also alleged that these were Christian corpers living together in a Redeemed Christian corpers fellowship camp setting. Critics quickly contested why Christians should segregate themselves in such way, defying the very essence of the integrative Youth service.

Why shud the corpers alienate demsef in a so-called religious houses? They made demsef vulnerable to all sorts of attacks by criminals.Where on earth did 20 corpers got some hundreds of thousands of dollars?… and what for? Or are their allowances now being paid in dollars? There is something fishy about this whole story.

Someone said that perhaps this story was cooked up because the corpers wish to leave Taraba, a rather peaceful state up north to a more lucrative state like Abuja, and used the laxity and carelessness of SaharaReporters editorial team to promote their goals.

May be they want to leave….

May they want to leave Taraba to a more attractive state, like Abuja. Sensationalizing the term “beheading” only implies Islamophobia. Who has the time to behead anyone during a robbery? It’s really pathetic

Critics asked why the so-called robbers would ask the religion of their victims when they found them in a church building. That this stinks of insanity/a story fabricated for ulterior purposes:

What kind of story is this? SR pls spare us this cooked up news.why will a sane man ask a corper in a church lodge of his religion?

Who owns the ” hundreds of thousands of dollars” the hoodlums made away with? To be candid I believe who ever writes this
shit for sahara must be an empty head and am beginning to believe this sahara is nothing but a blackmail business by SOWORE and his Pay masters.

In the past, NewsRescue has on occasion found SaharaReporters posting fabricated and unverified news with possible secessionist agenda. This we are not sure may be due to secessionist plans or simple media unprofessional-ism. See: SaharaReporters, PremiumTimes Spread Rumor of Attack on FGC Kano: Media or Monster?

We hope SaharaReporters will clarify and substantiate the news and respond to its readers criticism.

Related: In the passed we reported on similar media propaganda and junk journalism:
Vanguard and AllAfrica made a false claim of the victims of the Sunday Church mayhem. 9 Muslims were killed by Christians in the incident and no Church member reportedly lost their lives. But the main stream media for unscrupulous reasons portrayed an inverted image of the events.

Not long ago, in February we exposed a similar tale, propagated by OnlineNigeria in which a beheading which took place in Somalia in 2008 was recycled and portrayed as a brand new event in Maiduguri