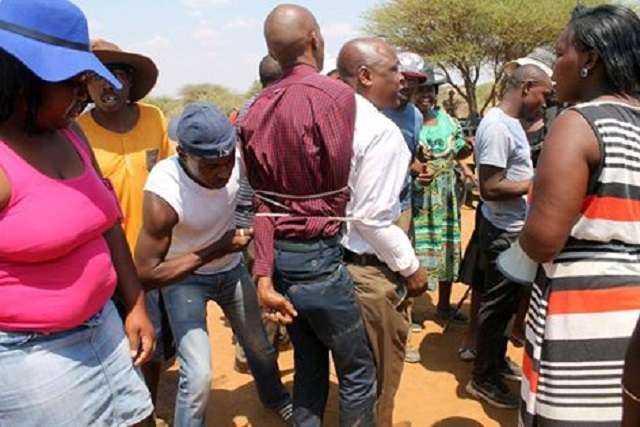 It was the end of the road for controversial South African Pastor,Penuel Mnguni, the Founder of the End Times Ministries, as angry residents of Mmakaunyane Village, in the North Western part of the country, burnt down his church and tied him up before beating him to a pulp.

According to Daily Sun, Pastor Mnguni who has been employing some strange practices like telling his congregation to eat grass, strip naked, swallow live snakes and bray like horses while carrying him around, had been lying low for sometime after a mob, led by South African vigilante group, the Economic Freedom Fighters, torched his church, resurfaced in the village trying to set up another church but the angry resident resisted his move and moved enmasse to bring down the structure.

Called the Snake Pastor, Mnguni thought he was set for a comeback in the village after he was chased away from his former church located in Soshanguve in Tshwane after he made many people angry, and was criticised by the South African Council of Churches, but with his appearance, the community held a meeting and marched to the tent in the bushes and started attacking his congregation.

The residents took the tent apart, threw all the chairs and Bibles on it and set it on fire!

Pastor Mnguni started operating in a school but was chased away by worried parents and decided to relocate to the village secretly and set up tents in the bushes but when the resident heard noises coming from the bush, they went to investigate only to fine the Snake Pastor who claimed he could walk on air and walked on his members under the guise of exorcising demons from them.

When they discovered it was Pastor Penuel, they discussed a plan and on Sunday, November 15, decided to destroy the tent, as well as everything inside.

It took the arrival of the police to rescue him after he was tied up and the harassed church member.