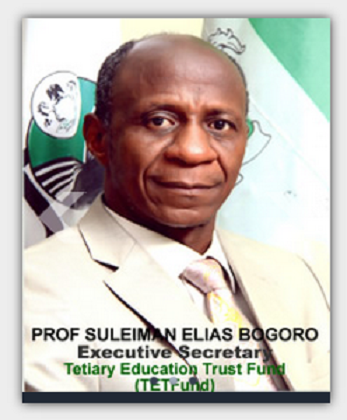 By Jerry Emmanson, Abuja
Civil Society Organisations under the umbrella of Civil Societies Coalition for Good Governance (CSCGG), have shown disdain over publications in the media, attacking the Executive Secretary of the Tertiary Education Trust Fund (TETFUND), Prof. Suleiman Bogoro.

Rising from a press briefing with journalists held at the ‘Occupy Nigeria’ ground in Abuja, it said the recent malicious news being peddled around of the mismanagement of the agency was the work of traducers.

Speaking during the press conference, the leader of group. Comrade Okpokwu Ogenyi advised that “Nigerians need to rise above the pull him down syndrome in the spirit of change to embrace useful reforms particularly in the education sector and not throw the nation into unnecessary bickering between stakeholders.
The groups have particularly condemned media attacks by one Auwal Ibrahim whom they claim have engaged in a campaign aimed at discrediting and dragging the Executive Secretary into cheap politics and attention seeking.
While calling on Prof. Bogoro to concentrate on his assignment at the Agency, Okpokwu also commended his efforts in strengthening tertiary education through the effective and prudent allocation of funds by the agency.
According to him rather than the current wave of condemnation, Bogoro rather should be commended and encouraged as his performance is unrivaled and should be an epitome for all who hold public offices.
Meanwhile the group has enjoined all well-meaning Nigerians to disregard the activities of the said Auwal and his fellow travellers in their unholy campaign and give the Agency the needed support.