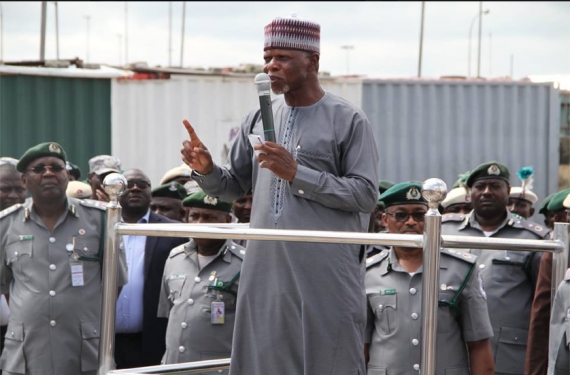 The Comptroller-General, Nigeria Customs Service (NCS), Hameed Ali, on Wednesday in a submission to the Senate Committee on Finance said that big companies like Dangote Group and Stallion had no need of waivers.

“If the big companies are given waivers, is it the smaller companies that should then pay custom duties?”

Ali, said waivers should be discontinued for big companies to allow other small firms to grow.

Investigations revealed that the abuse of waivers have been routine over the years in favor of some business leaders and politicians  in a manner that has continued to undermine the nation’s economy as they issue fraudulent waivers to themselves and their associates.

Other beneficiaries of these waivers at the expense of millions of tax payers are Chief Mike Adenuga, and Alhaji Saminu Turaki, former Jigawa State governor.

The administration of former President Jonathan granted a N50billion waiver to the Stallion group to import rice into the country, Per Second News gathered.

A senator speaking under the condition of anonymity revealed that the Federal Government has lost billions of naira that would have been used for provision of infrastructure and other contending needs of the downtrodden masses to the granting of waivers to business.

The Aluminium Smelter Company of Nigeria Limited (ALSCON) got N477.789million and N13.71million as waivers despite not producing since 2007.

Energy Resources Management Limited incorporated on June 18, 1999, with Mr. Jide Omokore and Richard Idowu as its directors also got waiver to import 250,000 metric tons of rice.

Investigations also reveal that in 2005, then Governor of Ogun State, Mr. Gbenga Daniel had applied to President Obasanjo for “import waivers” of N500million on vehicles meant to be imported for the 15th National Sports Festival tagged “Gateway Games 2006” in Ogun State . The Presidency immediate approved the request. However, rather than use the waiver for its purpose, it was allegedly sold to Globe Motors.

In 2003, losses suffered by government from concessions in the name of waivers was N12.4billion and in 2004 it climbed to N56billion and the Nigeria Customs Service, Apapa command lamented the loss of N6. 6 billion in 2013 to what it described as duty exemptions, concessions and waivers granted to certain organizations, between January and October 2013, which accounted for about 4.6 percent of the total revenue collected in the period under review.