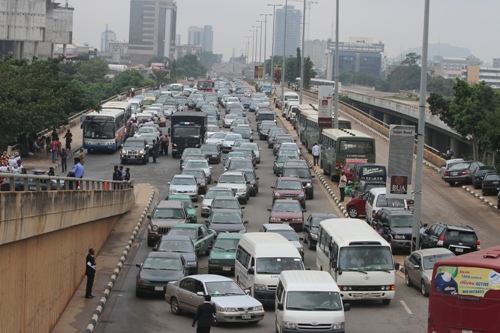 Motorists and commuters who had anything to do in the heart of Abuja yesterday faced hardship as all roads leading to the Central Area District were closed for a rally organised by First Lady Patience Jonathan.

Mrs Jonathan brought women from the 36 states of the federation into Abuja for what she tagged “Celebration of Nigerian Women for Peace and Empowerment” thereby creating big traffic crisis.

Many workers especially those whose offices are in the Federal Secretariat near the Eagles Square, venue of the rally, could not access their offices as the area was cordoned by armed security men.

Our reporters who monitored the situation reported that workers who insisted getting to their offices trekked long distances.
Commuters coming from Nyanya-Mararaba axis passing through the Police headquarters had to stop at the popular Bullet Junction, while those passing through Ahmadu Bello Way to Banex Junction, had to stop at the ministry of finance bridge as the roads were barricaded.

Some commuters who spoke to our reporters lamented the situation, saying it caused them a lot of hardship. A commuter who simply gave his name as Francis said, “As you can see, everybody is trekking. I have been trekking from Bullet Junction. I am going to NICON (Transcorp Hilton) Hotel. If not because of this, I would have boarded a taxi. I’m not happy at all.”

A female commuter who was going to her office in Wuse II said she trekked for more than a kilometre to connect her place of work.
“I’ve not seen any taxi around here. It’s really pathetic for most of us as you can see,” she noted.

Another commuter John lamented that he was very tired and was not sure of getting to work effectively with the kind of situation.
A taxi driver told our reporter that the rally caused serious traffic gridlock in some parts of the Central Business District, especially in places like Area 11, Central Mosque, NNPC/Defence College Junction among others.

Other commuters who spoke with our reporters said  although they had experienced similar situation in the past, yesterday’s case was the worst as it was not a public holiday, perhaps suggesting that it would have been held on a weekend.

The people of Lagos last year raised an alarm when the First Lady visited for one of her programmes.

Apart from heavy security and blockage of roads, a police chopper hovered round the venue of the event for several hours providing checks.

Women professional bodies and Non-Governmental Organisations (NGO), market women, religious organizations, wives of military personnel, paramilitary organizations and delegates from the states among others participated in the event.
Speaking, Vice President Mohammed Namadi Sambo who was special guest of honour reiterated government’s commitment to the empowerment of women saying it targets capturing 500,000 women and youths in its Subsidy Reinvestment and Empowerment Programme (SURE-P) annually.

He said President Goodluck Jonathan’s administration has significantly increased women’s participation in politics and decision-making stressing that government is committed to the conventions, treaties and protocols it ratified for the protection and empowerment of women.