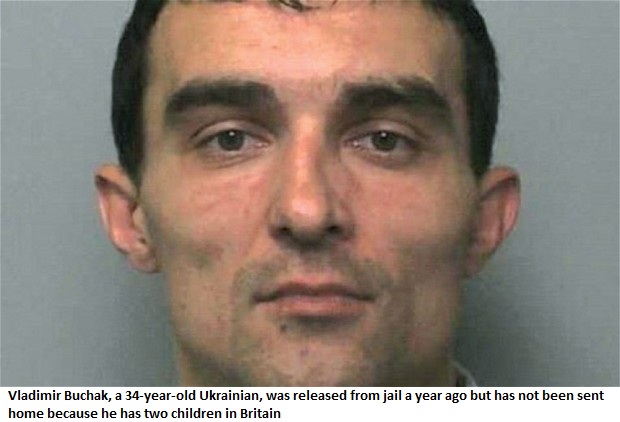 Telegraph– Two hundred and fifty foreign criminals who should have been deported at the end of their prison sentences were allowed to stay in Britain on human rights grounds last year without their claims being challenged in court.

In each case, the Home Office accepted their argument that deporting them would breach their human rights rather than asking a judge to decide. The number has increased fivefold in four years, throwing into doubt the commitment of Theresa May, the Home Secretary, to deporting foreign criminals.

They were allowed to stay despite Damian Green, the immigration minister, telling the Commons last December that the Government was “doing everything in our power to increase the number and speed of removals”.

• In 2011, at least one terrorist – and possibly up to four – was allowed to stay, as well as up to eight killers and rapists. Also among the total were 20 robbers and up to eight paedophiles, plus as many as four people convicted of firearms offences.

• In 2009, there were 17 robbers and 10 violent criminals allowed to remain, and between one and four murderers.

• In 2008 up to four people convicted of manslaughter and up to four rapists were allowed to stay.

The Home Office refused to name any of the 250 criminals, even though all have been convicted in open court of serious crimes that command a prison sentence of at least one year.

It also refused to disclose numbers of many categories of criminal. A spokesman said this was “in order to protect individual identities”.

The Home Office said there was a “strong likelihood” the criminals would have won their case if it had gone to court, meaning it was futile to attempt to deport them. A spokesman said: “There is no point in wasting taxpayers’ money contesting cases where we were advised we would lose. We examined each claim individually but case law based on the old rules meant the courts were highly likely to uphold them.

“In every case, and regardless of the crime, deportation cannot take place if doing so would breach the UK’s international obligations under, for example, the European Convention on Human Rights or the Refugee Convention.

“The rights of the individual are assessed in all cases and UKBA does concede deportation where there is a strong likelihood that those rights would be breached.”

The existence of the 250 emerged after Mrs May introduced tougher rules for courts on the use of the “right to family life” to stay in Britain in response to The Sunday Telegraph’s End The Human Rights Farce campaign. They came into force last week and have yet to be tested by the courts, but do not apply to previous cases.

The spokesman said the new rules would reduce the number of successful appeals to stay, and also the number of uncontested cases.

In addition to the 250 criminals allowed to stay last year, other figures have previously disclosed there were a further 409 who won their cases in the courts after bringing appeals.

Politicians expressed concern at the ease with which the criminals had stayed.

Chris Bryant, the Labour shadow immigration minister, said: “Theresa May has been trying to blame the Human Rights Act for not being able to deport foreign national offenders, but it’s becoming clearer every day that the real problem is her inability to get a grip of her department.”

Mrs May or Mr Green would have been informed of the decision to allow the most serious offenders to remain, sources said.

A UK Border Agency source said ministers would have been asked to approve the decision in the most serious cases.

And a former senior figure in the Home Office said: “Any remotely serious case will have been referred up to Minister of State level and, in all likelihood, to the Home Secretary.

“This action would have been taken by officials even if they thought they had copper-bottomed legal advice, ­especially since the foreign national prisoners affair in 2006 which cost Charles Clarke [the former home secretary] his job.”

However, the Home Office refused to say whether ministers knew that serious criminals stay in Britain unchallenged — or approved that decision. A spokesman said: “We don’t comment on internal processes.”

One of the cases where deportation was dropped is of an illegal immigrant convicted of organising Britain’s biggest sham marriage racket.

Vladimir Buchak, a 34-year-old Ukrainian, was released from jail a year ago but has not been sent home because he has two children in Britain.

Buchak paid eastern Europeans with the right to live in Britain up to £3,000 to marry Africans. European rules therefore allowed the Africans to stay. The Rev Alex Brown, his co-defendant, was also jailed for four years for carrying more than 360 bogus weddings at the Church of St Peter and St Paul in St Leonards-on-Sea, East Sussex.

The Home Office confirmed that Buchak’s deportation is on hold while the UKBA reviews “recent case law in respect of the rights of Mr Buchak’s children”.

The Home Office’s decision not to fight the cases in the court is brought further into question by cases it has won.

In May, it won a case against deportation by a suspected Afghan war criminal. Abdul Rahim Nassery, 44, a former mujahideen commander, spent five years fighting the case partly on human rights grounds, but lost.

In January, a Turk accused of assaults and other crimes claimed he should not be deported because of his right to family life. But the Home Office defended the case and Deniz Kavak, 36, was told he had to leave the country.

According to the Home Office, 1,888 overseas offenders lodged appeals under Human Rights Act legislation last year. Of these, 409 were allowed to stay — 185 because the criminal had a right to a “family life” in Britain under Article 8 of the European Convention on Human Rights.