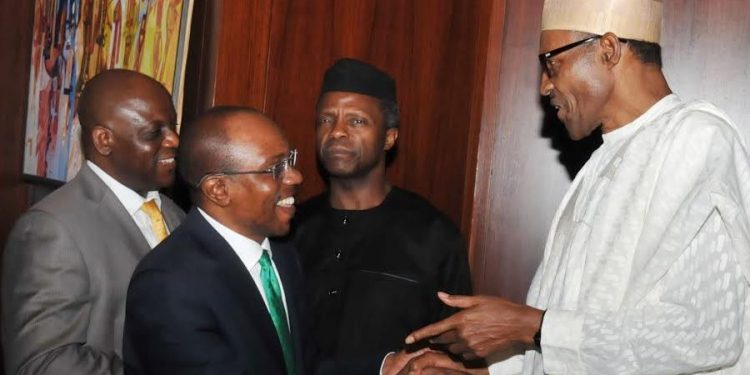 A massive and clearly illegal multi-source funding of the federal government by the Central Bank of Nigeria (CBN) could drag the Nigerian economy to its knees, experts familiar with domestic monetary conditions and current happenings at the CBN have warned.

The central bank had, in the last one year, pumped trillions of naira in illegally financing the federal government under different guises: from the mass purchase of treasury bills to humongous direct financing of the government through the “window account”.

Insiders say the apex bank is “creating money” to “finance a government that is broke and which does not have an economic vision,” in what one of them called a “desperate move by the central bank governor, Godwin Emefiele, to remain in office”.

A former governor of the CBN and a former deputy governor of the bank who spoke with PREMIUM TIMES were both alarmed by the long-term implications of such “direct and reckless financing of government” on inflation and other economic indices, including crowding-out the private sector from the domestic credit creation process.

The warning whistle was first blown at the last meeting of the CBN’s Monetary Policy Committee, held between July 24 and 25.

In the communique of the meeting published on Tuesday, members of the policy advisory committee expressed “concern over the increasing fiscal deficit estimated at N2.51 trillion in the first half of 2017 and the crowding out effect of high government borrowing.”

Some members of the committee, in their respective submissions captured in the 50-page report of the meeting, expressed reservations over the apex bank’s handling of key monetary and fiscal issues that may plunge the economy into a ditch.

However, it was an external member of the committee, Adedoyin Salami, who directly painted a gloomy picture of the extent of the government’s financing by the apex bank and other irregularities.

Mr. Salami, an economist and faculty member with the Lagos Business School, literary took the CBN to the cleaners in his assessment of its monetary policy which, he warned, was pushing the country towards a serious economic crisis.

“Monetary data shows a sharp rise in the extent of CBN financing of the government deficit,” he said.

From December 2016, according to the economist, the CBN had variously made cash available to the federal government running into trillions, mostly beyond legal thresholds.

He said the CBN’s claims on the federal government under the period amounts to N814bn, which is “twentyfold higher” than what the law permits.

Ironically, the claim of commercial banks, he said, “rose marginally by 0.4% to N4.6 trillion”.

Another route through which the CBN pumped money to the government, Mr. Salami said, was via the bank’s N454 billion spending on purchase of government’s treasury bills, which he said, had risen by 30 percent.

The government’s overdrafts from the apex bank also rose to N2.8 trillion within the period, representing a five percent increase.

But the sharpest rise in the figures, according to Mr. Salami, was in the government’s “mirror account” liabilities, which rose “from N3 billion at the end of 2016 to N1.5 trillion in April 2017”.

Authorities at the CBN are yet to contradict Mr. Salami’s claims.

A look at the CBN Act 2007 show that the huge direct financing of the federal government is in direct contravention of clear provisions of the Act.

Although Section 38 (1) of the Act empowers the bank to grant “temporary advances to the Federal Government in respect of temporary deficiency of budget revenue” subsection 2 of the same section stipulates, “the amount of such advances outstanding shall not at any time exceed five percent of the previous year’s actual revenue of the Federal Government”.

Additionally, subsection three of the section provides that such advances should be paid “as soon as possible and shall in any event be repayable by the end of the Federal Government financial year in which they are granted and if such advances remain unpaid at the end of the year, the power of the Bank to grant such further advances in any subsequent years shall not be exercisable, unless the outstanding advances have been repaid”.
By the estimated N6 trillion earned by the government last year, the CBN should have only granted advances to the federal government not exceeding N300 billion, representing five percent of the earnings.

The conduct of the government and the CBN, according to the economist, may, by limiting the organized private sector’s access to credit, have contributed to the dire straits in which the sector currently finds itself.

“We thus find ourselves at a point where government borrowing from the CBN is neutralized by raising the CRR of banks, thereby limiting private-sector access to credit,” he said.

“In other words, the private sector is deliberately “crowded-out”. It is ironic that the government, in need of tax revenues – having in the 1st half of the year accumulated its full-year deficit – is constraining the private sector from which the sorely needed revenues are to be derived.”

Sounding perplexed and perhaps frustrated, Mr. Salami said, “Whilst I still wonder what the underlying economics is – I sincerely hope it works!”.

To cushion the impact of these mass and illegal financing of the federal government, experts say, the CBN has been scrambling to evolve policies that would counter the destructive effects of its actions.

Some of these measures, PREMIUM TIMES understands, include the regular pumping of forex into the foreign exchange market to cater for high demand due to the attendant rise in naira liquidity.

“To prevent the effect of continuous and massive injections of cash to fund the Federal Government showing up in sharply higher inflation and currency weakness, the Central Bank now applies “special auctions,” Mr. Salami said.

Apart from raising the CRR beyond the 22.5 percent approved rate, Mr. Salami said, “the format of these “auctions” recall the dark days of “stabilization securities”.

Mr. Salami also flayed the bank’s “seeming haste to declare “victory” for “fragile” improvements in forex and inflationary statistics, saying the country is far from being out of the woods in some of those areas.

He lamented that “the most challenging of the present characteristics of the economy in Nigeria is the adoption of a quantitative easing stance by the management of the Central Bank”.

Another member of the MPC, Abdul-Ganiyu Garba, also faulted CBN’s monetary policies, accusing it of causing “contradiction or inconsistency problem”.

Mr. Garba, a professor, also indicted the bank for the significant distortions in “the forex market, the money market, the stock market and domestic prices” due to “strong growth in money supply in 2015 and 2016”.

A former deputy governor of the CBN and well-regarded economist who spoke to PREMIUM TIMES on condition of anonymity described the actions of the apex bank as “reckless” and beyond the parameters set by law.

He accused Mr. Emefiele of “hauling cash” to the government in contravention of the set rules and statues of the apex bank.

According to him, the government and the CBN “are setting the economy for a big fall”.

He said both the government and the bank “need to take policy adjustment measures” if they want to change the position of things, otherwise “they will continue to create money which will lead to serious inflation”.

Apart from the huge advances, it is illegally taking from the CBN, the federal government has also been ramping up a raft of local and foreign loans.

Another MPC member, Suleiman Barau, also sounded a note of warning on the implications of the payment of N760 billion as Paris Club refunds to states.

Mr. Barau, a deputy governor of the CBN, added that the possibility of payment of more money to states in the name of the refunds could further complicate economic recovery.

“The whole idea underlying the deployment of the fund is not completely bad as it could stimulate growth in output in the long run.

“The reality, however, is that the impact of this type of injection on aggregate demand tends to precede the influence on aggregate supply and invariably stoke inflation in the short run. Besides, there is evidence of growing liquidity surfeit in the banking industry in the face of sluggish growth in credit particularly to the private sector.

“It is not unlikely that the current injection may complicate the liquidity surge with potential adverse impact to the foreign exchange markets,” he explained.

This reporter’s efforts to reach CBN’s acting director of corporate communication, Isaac Okoroafor, for comments. on Sunday, were unsuccessful.

He also did not answer or return calls Monday morning. He, however, sent a text message requesting an SMS inquiry.

But as at the time of publishing this story, Mr. Okoroafor is yet to respond to the text message inquiry sent to him.

However, in his personal statement contained in the MPC meeting report, the CBN governor, who is also chairman of the committee expressed cautious optimism on the economy.

He also acknowledged the effect of the government’s undue mopping of money from the system, although in a subtle and passing manner.

Mr. Emefiele noted: “The growth in government credits due to expanded fiscal operations evokes the crowding-out of productive private sector in the short-run.

He, however, expressed optimism that “if the government succeeds in reducing the infrastructure deficit through its fiscal operation, I expect a favourable crowding-in of the private sector in the medium- to long-term.”

The CBN governor also blamed inflation and foreign exchange crisis on other factors other than he and the CBN’s roles.

Elrufai Must Stop Denying us our Religious ...