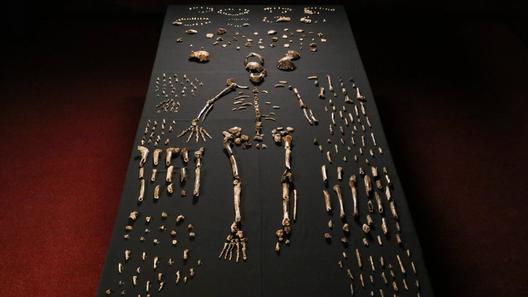 Science is an important road to truth. But, on the condition that the methods used are impartial and scientific facts are not distorted. However, when comparison is made between various animal and human species in many Darwinist studies and researches, in fact, rough methods are applied rather than scientific facts. For example, a so-called ancestral relationship between species is constructed within the framework of a method called “Topographic anatomy” used by Darwinists based on observational data such as  skull size, bone length and thickness, curve-flat formation of bones, tooth size and placement. In sorting the skulls of monkeys, which they allege to be the so-called common ancestor of man according to their sizes, Darwinists attempt:

Sometimes, a single tooth or a few bone fragments were turned into a whole body with modeling irrelevant to reality. What is more, that living being was even illustrated in an imaginary social life in order to increase its persuasiveness. At times, species completely different from one another that lived in the same period were arrayed from small to large just to present these to be on a so-called line of common descent. In fact, just out of ideological reasons, certain forgeries were invented to spread false news as if a “missing-link is found.” Based on such fabrications, counterfeit scientific articles were published, and fake fossils were exhibited in museums for years.

Some media organs have also supported all this deception, and even had no shame in presenting some old fraudulent claims to be new discoveries as part of their classical Darwinist tactic. The last example of this is a fossil discovery made in 2013 in South Africa, but announced to the world only in 2015. Recently, this matter was brought to the agenda in certain websites such as the CNN, Scientific American, and The Daily Mail on the pretense of being a new discovery.

We have occasionally responded to similar claims intended to indoctrinate people with the Darwinist mindset that there were presumably half-man half-ape living beings, which had lived before. Yet, in this article, what this fossil actually is and the non-scientific allegations related to it will be briefly explained.

More than 1,500 bone-remains claimed to belong to 15 different individuals were discovered in a cave in South Africa in 2013. Along with these bones named “Homo Naledi”, Darwinist circles came up with their so-called “missing link” scenarios in 2015 and these fossils were introduced as “a newly discovered so-called hominid species”.

The findings comprised of not a complete skull, but what they had were worn-out parietal bones placed adjacently without full contact as if hanging in the air. Despite that, it was claimed that this living being had a brain size of 500 grams, with a volume the size of an orange. The allegation was that the Homo Naledi could have lived 2-2.5 million years ago. In addition, it was suggested to be a mosaic form “that could climb trees with curled finger bones, but had hominid wrists and long thigh bones.” On top of all these, the pelvis bone found in fractured pieces was assembled to this construct just with the pretense that it could walk upright.

It was also a matter of debate how these fossils found in a barely accessible cave, 1,450 meters below the earth, came there. The story told these could have been consciously thrown or buried by other members of the species, because there were no tools or other living remains with them.

Certainly, 3D images and comparisons made with human beings were not left out in order to instill evolutionary ideas in people’s memory. The soft tissues such as eyes, ears, nose, skin and hair, which do not leave any residue in fossils, were fabricated as fictitious reconstructions. Although the maxillary and nasal bones were missing, the positions of the bones were determined by assumptions.

Whether the pieces of bones brought together belong to the same individual or to different ones, if they lived in the same period or not, and if the body parts of other species ended up mixed with these remains or not, are some of the points waiting to be clarified about Homo Naledi.

As it is seen, Darwinists persist with their unscientific attitude and ideological approach in presenting the fossils as well as their interpretation of the findings.

While there is much discussion about the fossils found, it is bewildering that their age has not been dated yet since 2013. Scientific American says the following on this issue:

“One other crucial fact missing was naledi’s age. Without this, it is difficult to pinpoint where exactly the species fit into the evolutionary scheme of things…” i

American paleontologist Lee Berger, who personally conducted the study in 2013, says in respect thereof, “But where it comes from, where it descends from, and what it gives rise to — if anything — we don’t know.” ii

This means if the fossils are older or younger than they are predicted, the missing link scenario written by Darwinists up until today will become totally meaningless.

All these expound that stories told about Homo Naledi have no scientific foundation, but solely rest upon Darwinist prejudice.

MAKE-BELIEVE PARALLELS BETWEEN CHIMPANZEES AND HUMANS

Lee Berger, the lead researcher on Homo Naledi, admits that the fossil findings do not correspond to any known human race. For that reason, Darwinist scientists have resorted to inventing a “new species” for the remnants of a fancy. For instance, while claiming that the fossil is a so-called intermediary hominid species filling the gap between Australopithecus and human beings, Berger’s assertions were partial and prejudiced in the face of research made on the bone discovery.

This assembled skeleton bears the traits of chimpanzees with all features. The shoulder joints and curved finger bones are the same with apes hanging from branches of trees. The large innominate bones and the downwardly expanding chest cage are particular to the Australopithecus, an extinct ape species. Despite claims of similarity with human feet, the foot bones of this living being are unlike humans having a lower nominal curve with a different orientation.

Although Australopithecus Afarensis is alleged to be the first ancestor in the so-called evolutionary tree of Darwinists, the thumbs of this being were longer than today’s chimpanzees or apes. This feature is utterly contrary to claims of evolution. In fact, Homo Naledi’s thumb is even longer than that of Australopithecus Afarensis. This finding once again disproves the imaginary progress in the supposed evolutionary tree. Having no parallels with human thumb, Homo Naledi remains are also quite different from the other fake “hominid” species in the imaginary evolution family tree.

In addition, Homo Naledi’s hand bears no similarity with the human hand in any way, its curved finger bones and other apelike features are further evidence that it is an ape moving around and swinging through tree branches. Even if Darwinists attempt at make-believe methods to draw parallels between chimpanzees and humans, it is impossible for this hand structure to grasp and use any tool as a human being does. What is more, no tools or artifacts belonging to human culture were found in this cave where the bones were found.

Moreover, the teeth discovered Dinaledi cave does not bear a resemblance like human teeth at all. Those approximate to a smaller ape species when compared with the Australopithecus series, thus have no parallels or similarities to human beings.

BRAIN SIZE IS NOT DIRECTLY PROPORTIONAL TO INTELLIGENCE

Findings about the history of man are based on fossil discoveries. However, since findings are often interpreted according to presuppositions of evolutionary theory, attaining scientific results is generally not probable. Even if a finding is contrary to evolutionary ideas, certain scientists approach such discoveries with prejudiced questions like, “How did evolution achieve this?” in order to keep the evolution theory alive. Or, they come up with irrational claims such as the “punctuated evolution”.

Henry Gee, an author writing in the Nature magazine, summarizes this bias of Darwinists with striking remarks:

“To take a line of fossils and claim that they represent a lineage is not a scientific hypothesis that can be tested, but an assertion that carries the same validity as a bedtime story—-amusing, perhaps even instructive, but not scientific.” iii

For clarification, let us explain this with an example:

Today we see people with different physical characteristics due to the genetic diversity God has granted us as a splendid variety. For instance, traits like being short or tall, eye and skin color, and many others are at a great variety although we are basically the same human being. Such differences were prevalent in the past as well. Evolutionists come up with numerous inconsistencies by distorting this fact with their false claims of human evolution. They array human skulls of different volumes in contradiction and make up an imaginary diagram. Hence, the skull volume of Neanderthals alleged to be the so-called “primitive ancestor of man” is in fact larger than average humans today, and thus contradicts with evolutionary claims.

With today’s technology, the physical structure and buildup of the brain may be examined in detail even at microscopic level. The human brain has an average weight of 1,200-1,400 grams in different individuals. Functional differences have not been detected even though male and female brains weigh differently. Moreover, neural connections in the brains of intelligent people also display no disparity under the microscope. Albert Einstein, regarded to be one of the most intelligent people known, had a normal brain volume.

Thus, all these inconsistencies show that neither a larger brain size is a sign of excessive development, nor a smaller skull volume is a deficiency. All of these are a part of the variety already existing in the human gene pool. Physical measurements based on bone sizes, and making predictions about a living being based on such calculations is distancing from science and will lead to very wrong conclusions.

Research made on the brains of living beings makes it clear that brain size and tissue are not proportionate to the intelligence or social development of individuals. In a similar way, it is nonsensical to conjecture guesswork on animals that lived in the past based only on anatomical measurements. While the dating of fossil findings cannot be made precisely, drawing conclusions based on these is only an ideological venture to impose the evolution deceit on societies.

When we examine fossil findings, the striking outcome is always the fact of Creation. Every living being appears suddenly in the fossil record and bears all the features necessary for living right from its origin. This is a requisite for the organism to sustain its life. The fossil records show that living species have undergone no changes in the course of their lives, while some have gone extinct and others have persisted until today.