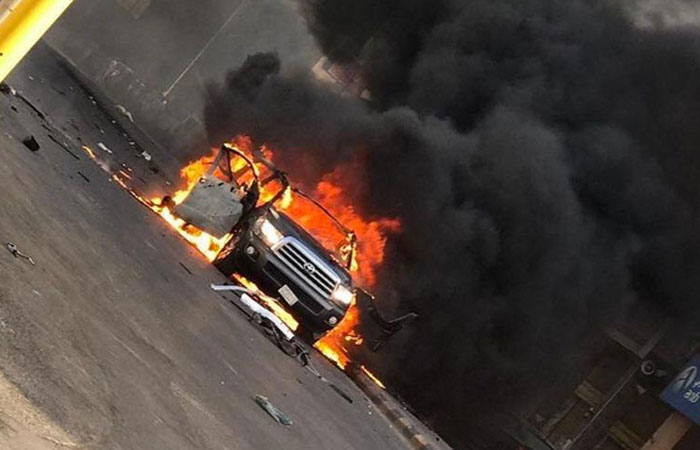 Initial reports indicate that the bodies of the two dead belong to two wanted fugitives from the Al-Awamiya area.

Informed sources said the explosion took place in a car laden with ammunition and explosives that the terrorists were transporting to Al-Awamiya.

The sources added that the two bodies are of the two wanted terrorists Fadhil Al-Hamada and Muhammad Al-Suwaimil.

Three men involved in the attack managed to escape and are currently being hunted by security officers in the area.

Videos posted on social media showed plumes of smoke and flames rising from a burning SUV near the scene of the attack. Witnesses confirmed sounds of gunfire accompanied the attack.

The security authorities speedily cordoned off the area and Civil Defense teams rushed to the scene.

Some people said the explosion took place near Sheikh Hussein Al-Amrani Mosque, which was targeted last Ramadan in a terrorist operation.

The Mayyas area, where the explosion took place, is very crowded around sunset (Maghrib). There’s a commercial area and many other markets, generally overcrowded especially during Ramadan, near the site of the explosion.