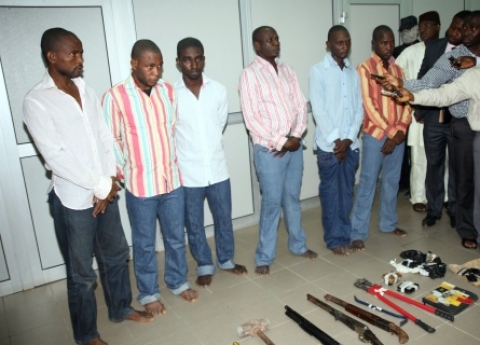 The State Security Service (SSS) today paraded 6 people described as principal suspects in connection with the killing in Benin  on 4th May, 2012 of Olaitan Oyerinde, principal private secretary to Governor Oshiomhole of Edo State, it was reported by Newsdiaryonline.

The briefing took an even more disheartening  turn when it was revealed that it was Olaitan’s guard that inadvertently exposed him to the  killers through his careless utterances. Said Ogar ,“Investigation has thus far revealed that careless statements made by Ali Ihade , the security guard of Comrade Oyerinde at various times about his master’s position in Government  attracted the attention of the prime suspect, Mohammed Ibrahim Abdullahi, who consequently hatched a robbery operation. On the day of the robbery, Abdullahi specifically instructed other gang members to tie up Ihade before they entered Comrade Oyerinde’s residence so that Ihade will not see his face.”

6 Dead in Secret Cult War Between ‘Aiye’ and ‘Black Axe’ in Benin-City; Linked To Politics ‘Booty’

She noted that “according to the robbery gang, Comrade was shot and killed by the prime suspect, Mohammed Ibrahim Abdullahi, when he ran into his bedroom and attempted to go underneath his bed. Abdullahi said he believed Comrade Oyerinde was reaching out for a gun under the bed and therefore shot him.”

She added that among the items the robbers removed from Oyerinde’s residence were four Blackberry phones, one Ipad, two Galaxy pads, one laptop, a wedding ring, and an unspecified sum of money belonging to Adeyinka Oletubo, brother -in -law to Oyerinde.

“The murder weapons comprising three guns used during the robbery have all been recovered .The above suspects are all currently in the custody of the Service  and would be handed over to the police for criminal prosecutions,” Ogar said.