Death for Uganda’s gays: Bill back on the table

Uganda is passionately remembered for its radical, uncompromising stand on the ‘gay’ issue. It’s eloquent, vocal and unapologetic, pastor Martins Ssempa, who holds a Masters degree from Philadelphia Biblical University, USA, is a world known face in the African struggle against what he refers to as a western implantation of ‘gay rights’.

In 2010, responding to powerful condemnation from US president Obama, Pastor Ssempa said:

First, President Barack Obama makes a mistake, gays and lesbians are never targeted for who they are, rather what they do. It is the repugnant sexual acts, which they do, which constitutes a crime, a sin and a rebellion against the order of nature.

Here in Africa, we believe homosexuals can CHANGE. It is very disappointing for Africans to hear Obama who ran on the ticket of “change we can believe in” suddenly growing cold feet when we postulate in faith that homosexuals can truly change. We wish to tell him that Sodomy is not the change we want, nor can believe in.

In History we will remember President George W. Bush for helping to stop the spread of the deadly HIV/AIDS, Malaria and Tuberculosis with his presidential emergency fund (PEPFAR).

On the other hand we are writing Obama’s history as one whose single focus is a divisive obsession with the spread of sodomy in Africa.

Related: NewsRescue- Uganda Pastor Ssempa To Obama: You ran on a change theme, don’t you believe Gays too can change

Uganda’s actions are likely to provoke a western threat to reduce aid to Uganda’s needy. It will be recollected that in 2011, the US Obama administration, threatened to cut Aid for AIDS in Nigeria after Nigerian legislature passed a bill criminalizing homosexuality. A popular slogan in Africa then was, ‘Aid or AIDS‘.  Invoking harsh rebuke, UK prime minister, David Cameron threatened harshly to cut aid to Nigeria for this bill.

More on the Uganda ‘gay’ bill

The bill was originally proposed as a private member’s bill in 2009 by David Bahati, a legislator with the ruling National Resistance Movement (NRM) party, provoking an international outcry.

President Barack Obama denounced the bill as “odious”, and the US secretary of state, Hillary Clinton, called on the Ugandan president, Yoweri Museveni, to reject it. International donors threatened to cut aid to the country if it became law. The bill was shelved last May. Following widespread international condemnation, the cabinet said in August it had decided to drop the bill because existing laws were sufficient to deal with homosexual “crimes”.

However, a small but vocal anti-gay movement led by several MPs and a group of bishops said it was determined to reintroduce the proposed legislation.

“The anti-homosexuality bill was retabled on the floor of the House today and has been referred to parliament’s legal and parliamentary affairs committee for scrutiny,” the parliamentary spokeswoman, Helen Kawesa, told Reuters.

“The committee is expected to examine it and conduct public hearings, and then it will report back to the House for a formal debate on the bill.”

Homosexuality is taboo in many African nations. It is illegal in 37 countries on the continent, including Uganda, and activists say few Africans are openly gay becuase they fear imprisonment, violence and loss of jobs.

The bill has given Uganda a reputation as the “world’s homophobia capital”.

Ghana and Tanzania have said they will resist pressure to legalise homosexuality despite Britain threatening to cut aid to countries that deny gay rights. 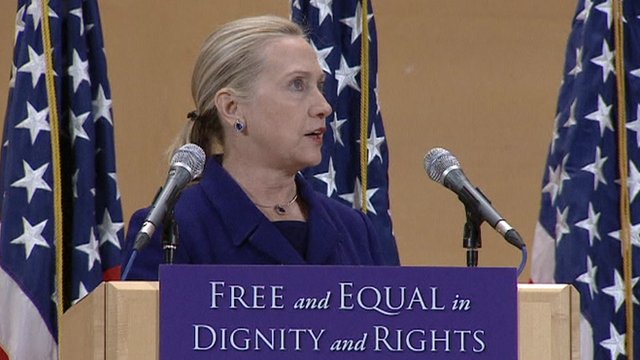 Hillary Clinton: "Being gay is not a western invention, it is a human reality" {BBC}

The Obama administration in December initiated the toughest US policy in history, to battle nations abroad who they deem anti-gay. In a  memo, the Obama- Hillary Clinton administration directed US government agencies to consider gay rights when making aid and asylum decisions. According to the BBC: The announcement, described by the White House as the “first US government strategy to combat human rights abuses against gays and lesbians abroad”, is also being seen as part of the Obama administration’s outreach to gays and lesbians ahead of the 2012 election.

The official memorandum does not outline consequences for countries with poor records on gay rights. But it allows US agencies working abroad to consult with international organisations on discrimination.