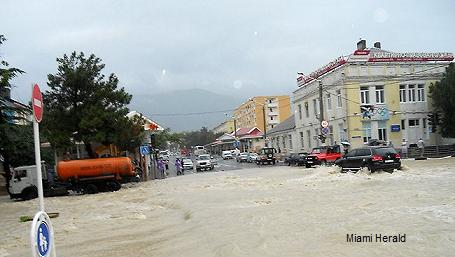 The UN-HABITAT’s prediction that By 2050, there could be as many as 200 million displaced people is fast becoming a reality.

Unprecedented disaster, wide-scale disruption and loss, it warned, face many of the world’s population, says the report, published last year.

More than 150 people have been reported dead in the Russian flood while many Lagosians have been sacked from their homes.

While the flood victims in Lagos received early warning to relocate,those hit by the torrential rain in Russia , according to media reports, said that even though officials admitted they knew a dangerous flood was coming, they had issued no warning or evacuation order

According to The Guardian, The town of Krymsk, home to around 57,000 people, was worst hit, with residents describing how a five metre (16ft) high wave swept through homes and cars, turning the town into a mud-bath in the middle of the night.

“Unlike the dozens of other tragedies that hit Russia every year – from airplane crashes to uncontrollable forest fires – anger with Putin’s regime was immediate and ubiquitous,” says The Guardian.

“If we had been warned, people could have been saved,” said Irina Loskutova, 50, standing in a muddy square near the central market, hoping to gather clothes and food as the city settled into a third night with no electricity. “They knew and they didn’t tell us.”

According to officials, heavy rains that hit Krymsk and other towns in Russia’s Krasnodar region overnight on Friday sent a torrential flood through the city.

Residents tell another story: the water came in such volume and at such speed that they are convinced officials purposefully let open the gates on a nearby reservoir, choosing to send its water through Krymsk’s winding roads, in order to spare Novorossiysk, a nearby port that is the country’s largest and whose main harbour facility is owned by allies of Putin.

Alexander Tkachev, governor of the Krasnodar region, said during a meeting with locals on Sunday that the first warnings of flooding came in around 10pm on Friday night – four hours before the waters hit. Residents say they were given no warning.

Over the weekend   in Lagos which was barely a week after the Lagos State Government warned residents of the areas to relocate for safety,following the rise of the water level,some cheated death as they scampered for safety.

The residents built makeshift wooden bridges to access their homes.  The flood caused traffic gridlock on the Ikorodu Road. Motorists, trapped in the traffic for hours, hissed in anger as their vehicles waded through the flood.

The traffic gridlock stretched as far as the eyes can see. Some passengers thrust their head-out of the vehicles to get fresh air. Men of the Lagos State Traffic Management

The Global Report on Human Settlement (GRHS)   published every two years by the UN-Habitat to inform government and partners of global human settlement condition and trend made shocking predictions last year.

For African coastal cities such as Lagos, Cairo, Casablanca and Tunis, the projections are shocking because the mitigation plans suggested by the UN body is presently not been aggressively followed.

Many African cities, according to the report, exceed the recommended annual average figure of 2.2 tonnes of CO2 equivalent value per capital. This has generated questions whether the world is really coming to an end.

According to the report, made available to this reporter  at the launch,  in coastal North African cities, a 1-2 degree increase in temperature could lead to sea level rise, exposing 6-25 million residents homeless.

Also, sea level rise projections from 2030 to 2050 indicate that Egyptian cities in the Nile Delta will be severely impacted including Port Said, Alexandria, Rosetta and Damietta.

In Nigeria and others, heavy dependence on fuel which has contributed adversely to greenhouse gases is still the order. With growing urbanization in the continent and little plans for environmental sustainability,many have asked, is coastal African cities doomed?

The professor had warned that   cities need to brace up against an assault of powerful natural forces, adding that an increased oceanic warming, melting and the rise in sea level presents a threat, especially to people living in coastal areas.

He said many rich countries , unlike some African countries, can bounce back after disaster but may be a total woe for the weak ones.

Oyeyinka, who urged the Nigerian  government to address infrastructural challenges in the country ,said since more than half of the world’s population now lives in urban areas, the growing demands of cities in terms of consumption and lifestyle would result to unprecedented disaster, wide-scale disruption and loss .

He said  the  effects of climate change is not only rife because of rising level of emission but lack of government’s capacity to tackle it by initiating sound environmental policies and tackling infrastructural deficits.

He said : “The failure of the government to plan for rapid urbanization has led to infrastructural deficit which contribute to climate change. Nigeria has recorded a huge formation of slums in the cities because of this structural shift.

On ways to mitigate the effects, he urged the government to include climate-sensitive features in infrastructural investments. He added that   apart from making climate change information accessible,Nigeria needs to consider alternative energy sources and change its policies on the use fuel .

Executive Director of UN-HABITAT, Joan Clos, had suggested the need for robust local level responses to climate change, to curb the menace.

“Urban enterprises, individual use of vehicles and rising consumer population are key sources of greenhouse gases. Not only are cities major contributors to climate change, but with ever-increasing densities, they will also be the hardest hit when nature strikes back,” Clos said.