What we are seeing with the accentuation in the demands by Nnamdi Kanu and his youth army, the Arewa – northern conglomeration of youth fora, the Niger delta front ‘declaring’ independence this October 1st and related pronouncements and declarations including the latest, the Youth of Odudua Republic, YOR “Lagos declaration,” are all a form of protest and statement of rebellion by Nigeria’s massive youth population.

The declarations are by a sect of the population who otherwise do not count, are never invited to national conferences, play next to no part in government or the issues that govern their lives and are only of value during political contests when they are paid to either vote or disrupt voting.

One only has to ask, why was the word “Biafra” never mentioned at any of the past two national conferences? Odudua and Arewa were mentioned.

Why are as many 40 million of Nigeria’s bulging youth said to be unemployed and the other 40 million who are employed are only employed by name with shameful jobs and meager emoluments?

The answer is simple: because the youth are not represented, they have no say. Broke and denuded, Nigeria’s youth have been relegated to the gutters. The country now called the Nigeria PLC investment company is run by the so-called owners, the no-retreat, never retire jet-flying cabal with headquarters in Minna and Abeokuta.

The old goons hate to hear the three R words, referendum, regionalism or restructuring that are now so common on the tongues of the youth. The reason is simple: these cabal were either former rulers of Nigeria, recycled several times over even at the highest level –the presidency– in partnership with their private sector friends who they use(d) to divert the nation’s resource through juicy deals, tax cuts, duty freedom and gifting of national assets.

The career politicians and their coterie of private sector cabal own industry in the north and the south, they have investments across Nigeria and as such they fight to keep Nigeria one at all costs. The youth own nothing, are valued as nothing, have no vested interests and are only desperate to find a way out of the mess. He who is down fears no fall.

In the last quarter of 2016, Nigeria lost 1.4 million jobs according to the National Bureau of Statistics, NBS. This continued a trend of job losses approaching 10 million since the new administration took over. Tickling the situation with few hundred thousand jobs through N-Power and social security charity for a lucky couple of hundred thousand is doing little to ameliorate the situation.

Nigeria’s youth are tired and hopeless and are ready for a new equation. The old goons are happy with how things are, the immune cabal have been in every government since independence and are now once again comfortably planted in the latest, being board members of all panels including the northeast’s PINE, and chairmen of the lead parties and fully occupying the presidency. They sponsor the lead parties and control the decisions of the government.

I conducted a little survey on twitter: so far of voters 56% want some form of breakup, with 43% asking for regionalism and 13% for secession. Only 44% of Nigerians polled want to keep Nigeria “one.” This is the reality the old goons will never test, accept or permit without bloodshed. 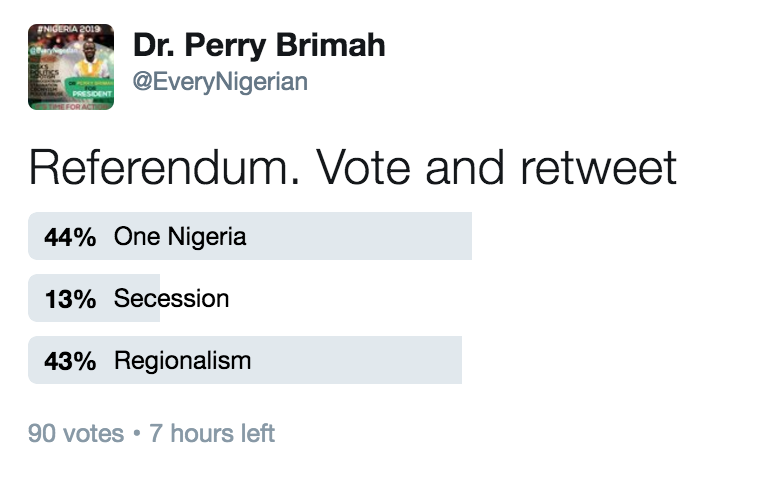 In a latest recording by the northern youth, speaking for the Arewa group, Nastura Ashir Sheriff did not mince words lambasting Kaduna state governor Nasir el-Rufai and his Borno counterpart. “They do not represent us. See the southern politicians standing by vocal secessionist Nnamdi Kanu, but our so-called leaders here castigate us while never defending our lives and rights over there,” he said. “We know them personally for long. El-Rufai and Shettima are only opportunists, hoping for Buhari to die so they can become Vice President…this is why Shettima was inviting Obasanjo and Tinubu to acknowledge them with awards,” he continued. “They should relocate to the east.”

This is the level of fervor of the youth protest. The youth have lost respect for the old goons who we blame for our current predicament and while the objective of the protests may seem different, underlying the declarations we see, north, south, east and west is the same: a fight for survival, for relevance, for opportunity, whether together or just as well, apart.