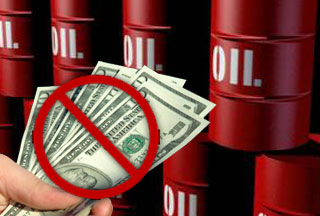 According to the report written by Independent’s Middle East correspondent Robert Fisk, the proposal was to replace US dollar for crude oil trade by a basket of different currencies over a period of nine years until 2018.

“Secret meetings have already been held by finance ministers and central bank governors in Russia, China, Japan and Brazil to work on the scheme, which will mean that oil will no longer be priced in dollars,”

said the report, adding that France had also been involved in the talks.

The basket would include the Japanese yen and Chinese yuan, the euro, gold and a new, unified currency planned for nations in the (Persian) Gulf Co-operation Council, including Saudi Arabia, the United Arab Emirates, Kuwait and Qatar.

The report did not make clear how the change would happen; a big change that would break the oil/dollar link, essentially a treasury operation that Iran, for instance, has already undertaken.

If the plan materializes, analysts say, it could be a major blow to the US economy, already suffering from an unprecedented downturn.

The report added that an unnamed Chinese banking source has confirmed the plan, saying that it would “change the face of international financial transactions.”

Earlier in September, World Bank President said the United States should not take for granted the dollar’s status as preeminent global reserve currency because other options are emerging.

Robert Zoellick added that global economic forces were shifting and it was time now to prepare for the fact that growth will come from multiple sources.

Iran’s President Mahmoud Ahmadinejad ordered in September the replacement of the US dollar by the euro in the country’s foreign exchange accounts.

Iran had announced earlier that the euro would replace the greenback in the country’s oil transactions. Iran has called on other OPEC members to ditch the sinking dollar in favor of the more credible euro.  – PressTv

NewsRescue commentary-  The dollar subsequently lost value today in relation to this news and the desicion of the World bank to remove the dollar as the world reserve currency this coming week.

This has been in the making and is not a surprise. The war against Iraq was waged at the time Saddam Hussein had decided to discontinue selling oil in the dollar.

Analysts say that the US ‘Elite’ has prepared for this initiation of the new world order, and have moved their vital assets to other nations like Dubai where the headquarters of giant corporations like Haliburton are presently located, and have also moved their finances all over the world. Hence in a comfortable ditching of the US ‘ship’, they, ‘Elites’, will continue to control global finances while the United States citizen saves himself along with America.